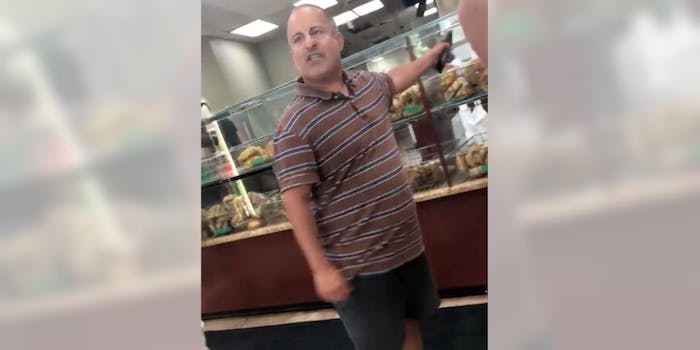 ‘Misogynistic douchebag’ goes on rant in a Bagel Boss, gets tackled

He's upset no women will date him because of his short stature.

A New York man can be seen in a now-viral video sounding off in a misogynistic rant about how no one will date him because of his short stature.

The incident took place at a Bagel Boss on Wednesday, leading the bagel establishment to trend on Twitter.

Olivia Shea, one of the two women who filmed the incident, posted the video and claimed that the “misogynistic douchebag” was degrading the female staff.

so in bagel boss this morning, the misogynistic douchebag seen in the video was degrading almost all of the female staff as well as other patrons. fuck this guy. pic.twitter.com/LZh1Uk4UXZ

“You’re degrading women, why is that OK?” one of the women is heard asking him in the video.

The man then gets even more upset and goes on a rant about his struggles with online dating.

“Why is it OK for women to say ‘you’re five feet on dating sites, you should be dead,’ and that’s OK?” he responds while throwing the newspaper he is holding on the ground.

One of the women rhetorically asks the man who, in the Bagel Boss, said that to him.

“Women, in general, have said it on dating sites you think I’m making that shit up? Everywhere I go I get that same fucking smirk, with the biting lip.” the man says while pointing at the Bagel Boss workers.

A third male patron gets involved and tries to calm the man down.

“Shut your mouth you’re not God or my father or my boss. Dude you want to step outside?” the man says to the taller intervener, as he squares up. “I’m not scared of you, pal.”

A fourth customer can be heard trying to reason with the man by saying, “enough, enough.”

And so he did. As one Twitter user declared, the customer became ~the Bagel Boss~ by tackling and pinning the man to the ground.

Shea can be heard relatably saying, “I just want my bagels” at the end of her video.

Another bystander, who also filmed the incident, later uploaded a part two on Twitter, detailing what happened next. The man takes his frustrations out on the female employees in the latter half of the incident.

“You women need to stop being so fucked up,” he says to them.

If you guys wanted to know what happen next, here ya go pic.twitter.com/jOHzispksW

Bagel Boss owner Donald Rosner later tweeted that anyone who mentioned the video at one of its locations would get a free, small bagel.

“After today’s incident, everyone is OK! Use caution on dating sites and anyone who comes into our locations and mentions this video can get a FREE MINI BAGEL!!!!!!!!” Rosner wrote.

A MESSAGE FROM BAGEL BOSS: After todays incident everyone is ok! Use caution on dating sites and anyone who comes into our locations and mentions this video can get a FREE MINI BAGEL!!!!!!!! https://t.co/Pvi9jXxI6t