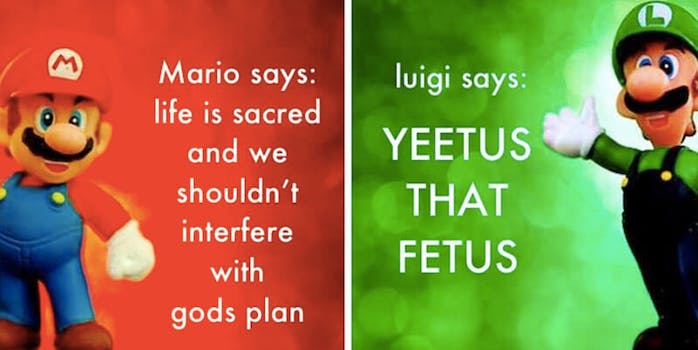 He represents the worst of the internet in this meme.

Like many pop culture mainstays that have been ingrained in our society for decades, the Super Mario characters have always been extremely memeable—especially as the video game universe continues to expand and evolve over time. For example, Nintendo recently caused an uproar by gifting fans Mario’s nipples and Luigi’s wiener, which the internet proceeded to promptly freak out about.

The most recent Super Mario meme to go viral started on—where else—Reddit in the r/dankmemes subreddit, when user Gina_Rolinu posted the following image back in June in which Mario and Luigi have a friendly debate over abortion. Whereas Mario presents a thoughtful, albeit conservative argument, Luigi on the other hand all-cap proclaims, “YEETUS THAT FETUS.”

What would you do? from dankmemes

As the post began to go viral, others jumped in and turned it into a meme, presenting Mario as the rational, level-headed viewpoint as Luigi would yell a nonsensical, oftentimes rhyming (and increasingly violent) counter hot take. It’s almost kind of a Goofus and Gallant dynamic, only mostly terrible because this is the internet, after all.

Luigi for president 2020 from dankmemes

Luigi is woke man from dankmemes

I’m with Luigi on this one from dankmemes

Unfortunately, as these things tend to go, the meme got appropriated by those who used it in racist or misogynistic implications, as you can see in a couple of the more sexist examples below:

Other people started using some of the other Nintendo characters, such as Mario and Luigi’s respective lady friends, Peach and Daisy, in the meme:

And then the meme began to consume itself:

Yeet my feet to the beat from dankmemes

It’s unclear why poor Luigi is the one who comes off looking like such a huge dick in this situation, but maybe that’s just type of reputation you earn yourself by having such a sick death stare. Either way, now that Nintendo has fully embraced the death stare, we can probably hold our collective breath for that to change anytime soon.