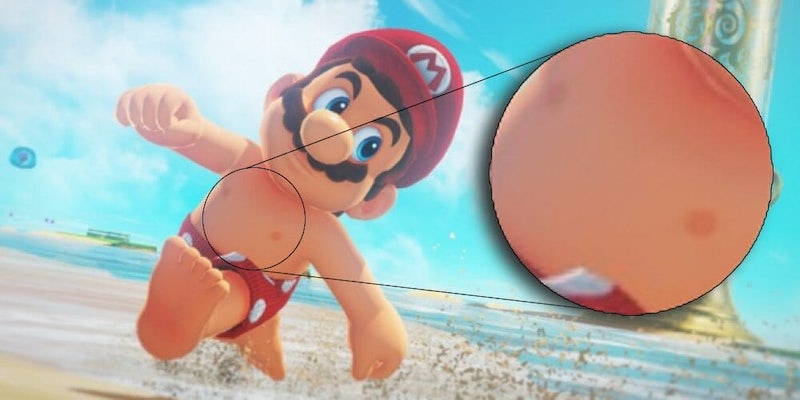 After all these years, Nintendo finally showed us Mario’s nipples

Nintendo released a preview this week of its upcoming Mario game for the Switch console, Super Mario Odyssey. Odyssey brings many revelations about Mario, including that the beloved Italian plumber is no longer a plumber and, more importantly, that his nipples look like this:

Explore the frozen fields of Shiveria in the Snow Kingdom & the sunny shores of Bubblaine in the Seaside Kingdom in #SuperMarioOdyssey! pic.twitter.com/p8AsDqBbTj

In his 35-plus years of existence, Mario has never been seen without a shirt, and people are freaking the heck out at his little pixelated nipples. Tweet after disbelieving tweet asked, “Whoa, Nintendo, what’re you doing?”

Great, now I know what Mario's nipples look like. pic.twitter.com/OnZhmL7hNR

Everyone's talking about Mario's nipples but the first thing I noticed was the lack of a belly button, indicating he wasn't of woman born. pic.twitter.com/2vHeUqb3bu

Some, however, felt Nintendo hadn’t gone far enough with topless Mario. They want to see his… uhh… “power-up mushroom.”

Ugh, wake me up when we can see Mario's dick

Others were more sensible: Wouldn’t it be unusual for Mario, a fictional human being, *not* to have nipples? Maybe this is progress for Nintendo.

dear everyone tweeting about shirtless Mario and his nipples: like, it'd be weird if he DIDN'T have nipples, right?

Mario’s nipples are a sign of a more progressive Nintendo. Remember when he used to go to the beach in fucking overalls? What a prude. pic.twitter.com/K1qkrEbjKG

Important questions still remained unanswered. Mario’s nipples are free on Twitter and on the Nintendo Switch, but will they violate Instagram’s infamous anti-nipple policies?

Furthermore, where are LINK’S nipples? Isn’t the hero of Hyrule human, or at least humanoid?

2017 is the year we learned that canonically Mario has nipples and Link doesn’t pic.twitter.com/cz47qXAtva

mario has nipples and link does not. so what the fuck

Anyway, everything that needs to be said about Mario’s nipples has been said, and we’re all done talking about them.

It was fun while it lasted, though.