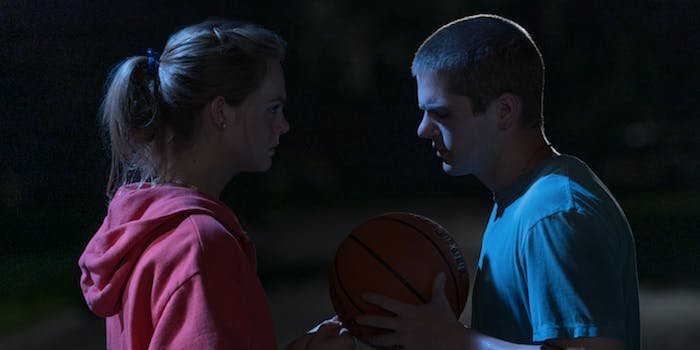 This docuseries at least tries to take a different approach to true crime.

Hulu’s The Girl From Plainville, which takes its name from a 2017 Esquire piece of the same name, offers a dramatized version of the controversial Michelle Carter texting-suicide case. And while a good deal of the series is a thoughtful exploration of virtual relationships and mental health, it ultimately veers into another by-the-numbers true-crime retelling.

Carter was found guilty of involuntary manslaughter in 2017, three years after boyfriend Conrad “Coco” Roy III took his own life—at Carter’s (virtual) urging. There’s plenty of documentation for what happened: In 2019, Erin Lee Carr’s documentary I Love You, Now Die explored the case and looked deeper into Carter and Roy’s mental health struggles. After its debut at SXSW that year, Carr told the Daily Dot she hoped the doc “fosters a sense of empathy and understanding for Michelle, and empathy and understanding for Conrad, who is no longer here.”

The series attempts to do the same, as co-showrunners Liz Hannah and Patrick Macmanus find inventive workarounds for a relationship that was mostly text-based. Instead of relying on lengthy threads to spell everything out, a text often leads to the two suddenly appearing in the same room, so we can see them interact and build their characters. As Carter, Elle Fanning offers an appropriately conflicted portrayal—she is immensely talented at just acting with her eyes and face, softly expressing the pain and frustration of being a teenage girl uncomfortable in her body and at odds with her brain. The series tries to paint a broader picture of Carter, hinting that she was struggling with her sexuality, as well as an eating disorder. Her Glee fixation, specifically on couple Rachel and Finn, is woven into a couple of heartbreaking scenes, but those trips into fantasy serve to blur the lines.

Colton Ryan is excellent as Roy, giving some shape to a man we’ve really only seen in photos. He’s affable and beloved but believes he’s doomed, and in this agonized state Ryan doesn’t overplay him. It’s clear these two people understood each other because of the darkness they both had in them. Roy wonders in one scene if that’s good.

Chloë Sevigny anchors the series as Roy’s mother Lynn, playing her as stoic but steeped in grief. Norbert Leo Butz is well cast as his hot-tempered father, Conrad II, but like Carr’s documentary, the series focuses much more on Roy’s family dynamic than Carter’s.

Eventually, the series segues into Carter’s trial and starts to lose momentum. While it’s always nice to see Aya Cash in something, her role as assistant district attorney Katie Rayburn feels wasted, and the trial reenactments weigh down the last few episodes.

Much like the recent parade of bad-boss and scammer docs, The Girl From Plainville takes too long to tell a story whose ending we already know. After eight episodes, it’s still plagued by the same issue as so many of these docudramas where the main subject had no input. But unlike all those shows, it gets a little closer to the “why.” And it could actually have real-world implications: Roy’s mother is hoping it helps the push for legislation that would criminalize coerced suicide in Massachusetts.