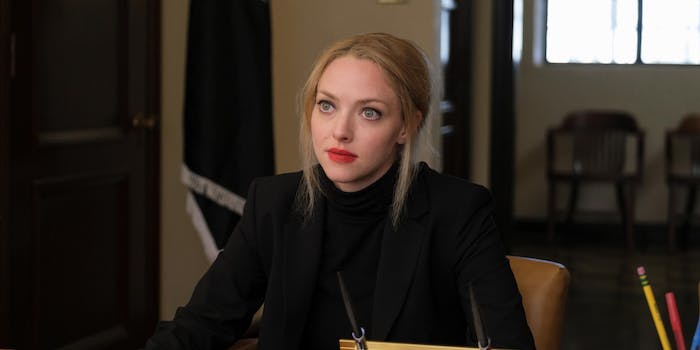 Review: Hulu’s ‘The Dropout’ dramatizes the rise and fall of Theranos

This rather conventional docudrama is a smidge too sympathetic toward its notorious subject, Silicon Valley fraudster Elizabeth Holmes.

It’s kind of a cliché to complain about a docudrama being overly sympathetic toward its notorious criminal protagonist. But, well… The Dropout is a smidge too friendly to Elizabeth Holmes, emphasizing her fictionalized vulnerabilities before charting her scandalous fall from grace. The story of Theranos has already been exhaustively documented in nonfiction media, leaving this show with one specific task: Dramatizing Elizabeth Holmes’ inner life, based mostly on speculation.

Is Holmes a stone-cold supervillain, or was she, like her collaborators, just hopelessly in over her head? Did she feel guilty for defrauding her investors and bullying anyone who got in her way? Amanda Seyfried offers a convincing impression of Holmes’ distinctive mannerisms—the fake-deep voice, the staring eyes, the twitchy smiles—but the show’s overall thesis is more ambivalent, positing that behind the scenes, Holmes was plagued by doubts.

We meet Holmes as a teenager in the early 2000s, clad in some realistically unflattering normie fashion and accompanied by corny pop music. (The Dropout loves vintage needle-drops, to a sometimes-annoying degree.) An ambitious loner, she’s too driven and socially awkward to make friends among her own peers. On a trip to China, she embarks on an intense friendship with middle-aged tech millionaire Sunny Balwani (Naveen Andrews), who will later become her boyfriend, business partner, and most ruthless accomplice. But they first meet when she’s still a senior in high school, before she went to Stanford and dreamed up her signature invention: A machine that diagnoses dozens of diseases from a single drop of blood.

We know now that this machine never really existed. Even after years of research and hundreds of millions in VC funding, Theranos never came up with a working prototype. It’s one of the most notorious frauds of the 21st century, and The Dropout makes it clear that Elizabeth Holmes isn’t the only person to blame. From the very earliest days of her career, Holmes is faced with scientists and skeptics who point out that her invention is years away from functionality. But they’re drowned out by the hunger of Silicon Valley startup culture, typified by Mark Zuckerberg’s old motto, “Move fast and break things.”

The trick is to be aggressively confident, a lesson Holmes learns from billionaire Larry Ellison early in her career. During a pitch meeting on his yacht, Ellison rambles about his rich-guy hobbies. When Holmes tries to turn the conversation to business, he gives her a word of advice: It’s better to just Get The Fucking Money. The message here is twofold: Don’t focus too much on technical details, and find a way to fit in with the macho culture of startup financing.

Years later—still an awkward loner, but far more practiced in the world of business—we see this lesson play out in an episode aptly titled “Old White Men.” Holmes gets former Secretary of State George Shultz (Sam Waterston) onboard simply by listening to him talk and flattering him as a potential mentor. Meanwhile, the CEO of Walgreens (Alan Ruck, reprising his airheaded Succession performance) is bamboozled by the image of Theranos as youthful and innovative. Like all the best scams, Theranos preyed upon people’s emotional weak points.

The real story of Theranos is full of people who can be sanded down into cinematic stock characters: sympathetic whistleblowers, avuncular academics (Stephen Fry, playing to type), and rich idiots with more ego than common sense. It’s easy to tie this all together into a conventional docudrama narrative, and The Dropout certainly held my attention—especially in the latter half, when reporter John Carreyrou (Ebon Moss-Bachrach) starts investigating Theranos. But like Netflix’s Anna Delvey dramatization Inventing Anna, there’s a lingering sense that truth is more exciting than the fiction.

While The Dropout doesn’t actually portray Elizabeth Holmes in a positive light, it’s keen to fit her life into a neat character arc. In doing so, it falls foul of something the show itself critiques: The way Holmes benefited from her status as a young white woman. It’s a tricky situation. On the one hand, it would be ridiculous to suggest that Holmes is a uniquely destructive figure. While she’s certainly eccentric (“I don’t feel things the way other people feel things,” she says at one point), she’s surrounded by accomplices who aid and abet her worst impulses. Holmes’ trajectory echoes that of the men behind WeWork and Uber; a product of the capitalist ecosystem.

At the same time though, The Dropout affords Holmes a lot more private vulnerability than we’d expect to see for one of her male peers. It avoids depicting her as truly, unsettlingly unpleasant, in the same way that it skirts around the idea of condemning Silicon Valley investor culture as a whole. A competent and entertaining dramatization, but not an especially fresh or insightful one.