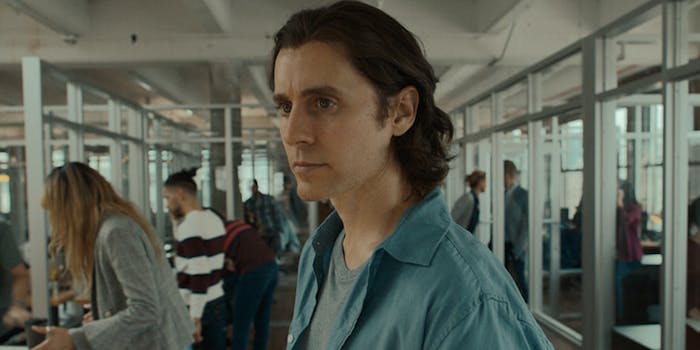 ‘WeCrashed’ is another empty rise-and-fall story

The Apple series focuses too much on its 'love story.'

Apple TV+’s new workplace drama is the latest adaptation that uses famous actors to get us to feel something for bad bosses.

Based on the Wondery podcast series of the same name, WeCrashed stars Jared Leto as WeWork co-founder Adam Neumann and Anne Hathaway as wife Rebekah Neumann (formerly Paltrow, as in Gwyneth’s cousin). In 2019, Neumann was ousted as CEO of WeWork, after the company’s fateful IPO. That’s where WeCrashed starts, before working backward to show the rise before the fall.

It’s a familiar formula, and WeCrashed debuts in the middle of a docuseries glut, specifically one stuffed with shows about the rise and fall of scammers and bad companies. But of all the shows about narcissistic founders, WeCrashed at least pulls back the curtain on how fake numbers like $47 billion are. There are some technical issues, like that Neumann is 42, Israeli, and six-foot-five and Leto is not. (Leto does his best with the Israeli accent, though at first, he’s definitely serving Tommy Wiseau.) Co-founder Miguel McKelvey (Kyle Marvin) is a more sympathetic and instructive character, showing how easy it was to get swept up in Adam’s orbit, and how hard it was to disengage.

This series is being marketed as a “love story,” one in which Adam and Rebekah are brought together to “Elevate the world’s consciousness.” The New Age-y Rebekah is his champion but also grows to resent his success. Given their privilege, their fights are often humorous, like when she demands to be given credit for WeWork’s mission.

Hathaway doesn’t let Rebekah tip over into Goop-y parody. She gives Rebekah a point of view as she struggles to get the same recognition and adoration as her husband, but we also see her privilege and blind spots. One episode is devoted to WeWork’s first Summer Camp event, where employees essentially party for a weekend. After a comment by Rebekah is deemed not feminist during the event, she holds a “listening session” for the women of WeWork and gets torn apart.

The show needs more scenes like this, where the disconnect in startup culture is called out. WeCrashed features a handful of employees who are meant to convey what it’s like to work there. We get a glimpse of the carefree early days via Chloe (Cricket Brown) who struggles to keep up with the company mandate to drink and party. Unfortunately, so much focus is on its big-name leads that the other side of the WeWork experience is essentially hollowed out. WeWork pushed “Hustle harder” and “Thank God it’s Monday” as mantras, and rose in popularity alongside Instagram, where the millennial work-life balance was reframed. But the earnest entrepreneurial spirit of the early 2010s quickly devolved into the extreme burnout of the late 2010s, and that’s barely touched on.

Considering Leto’s history of unnecessary method acting, he tends to underplay the eccentric Neumann, and by the last few episodes, you really don’t want to see him anymore. There are editing and directing choices that attempt to keep viewers engaged—Slick montages! Needle drops of era-specific music! A Harlem Shake scene that further acknowledges the era!—but like other series based on very recent stories, an eight-episode run is too long. Does this story really need a podcast, a documentary, and now a TV show—from a tech company, no less?