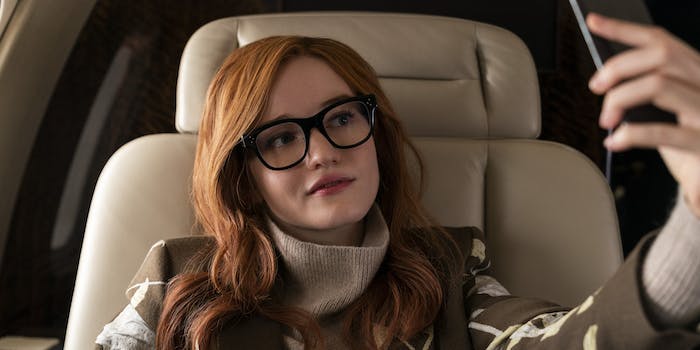 This new Shonda Rhimes miniseries suffers from focusing too much on a character who isn't Anna Delvey.

The story of con artist Anna Delvey is packed with schadenfreude, betrayal, and a glittering sequence of cinematic crimes. Why, then, does Netflix’s Inventing Anna spend so much time on a far less interesting side-character?

Like the 2019 stripper movie Hustlers, this Shonda Rhimes miniseries is based on a blockbuster New York magazine article by journalist Jessica Pressler. But where Hustlers understood that we’re here for the article’s fascinating subjects, Inventing Anna puts the writer at center stage. Not Pressler herself, but a fictional reporter named Vivian (Anna Chlumsky), whose storyline is both generic and oddly unrealistic in its depiction of modern journalism.

From 2013 to 2017, Anna Delvey (née Sorokin) posed as a German heiress in order to defraud New York’s elite, resulting in a series of criminal convictions. Her tale falls somewhere between Fyre Festival and Robin Hood, and Inventing Anna’s target audience is here to watch these salacious events unfold. But before we properly meet Anna (Julia Garner), we have to follow Vivian’s implausibly contrived quest to tell her story.

Vivian’s career feels like something from the pre-internet era: A staff reporter at a major print magazine (a highly competitive job!) who specializes in long-form investigations (ditto!) but is widely regarded as incompetent due to a scandal in her past. She doesn’t seem to be filing any stories, and regularly has blow-up fights with her editors, who tell her that Anna Delvey isn’t worth covering. A wild editorial move because “fake heiress” is an incredibly juicy scoop. There’s no good reason for them to reject her pitch out of hand.

Shonda Rhimes specializes in depicting flawed yet talented women in professional settings, but it doesn’t make sense to give Vivian the protagonist role here. Why does there need to be a behind-the-scenes struggle over whether Anna’s story will make it to print? The story itself is already interesting!

Each episode focuses on one of Anna’s former associates, a framing device that would work better if they were more obviously unreliable narrators. At first, Vivian highlights the idea that different interviewees describe Anna in very different ways. But instead of offering clearly subjective views from figures like Anna’s personal trainer (Laverne Cox), her tech entrepreneur ex-boyfriend (Saamer Usmani), and her high-society benefactor (Kate Burton), the flashbacks are straightforward dramatizations of pre-arrest events.

Anna Chlumsky does her best with this material, but if you want a relatable viewpoint character, Delvey’s hotel concierge pal Neff (Alexis Floyd) is a better bet. She and Anna are a perfect pair: A person who specializes in facilitating the demands of the super-rich, opposite a very demanding rich person. (Or rather, supposedly rich.) Their friendship is transactional yet surprisingly sincere, contrasting with the more transparently manipulative nature of Anna’s other relationships. Judging by the real Neff’s Instagram page, she still stands by her infamous friend.

Inventing Anna is at its best when Anna is in the foreground, scamming people and digging her own grave with increasingly grandiose schemes. Julia Garner hits the right tone for this rather schlocky series, speaking with a nasal German/Russian accent and keeping her victims on their toes.

Sometimes vulnerable, sometimes cruel and duplicitous, she’s volatile in a way that only rich people can get away with. Which is really the trick. The entire system she infiltrates—the high-end banks, the exclusive parties, the glamorous hotels—is built around expectations and connections. Anna got this far through sheer force of personality. And through white privilege, something the show only touches upon in passing. Inventing Anna is light on direct social commentary, although you can’t avoid noticing that Anna’s wealthy victims are sabotaged by their own snobbery—and that America’s financial institutions are a playground for white-collar crime.

With episodes lasting over an hour, Inventing Anna is too long. The source material of the magazine article would make a great Catch Me If You Can-style movie, but this show pads it out with unnecessary screentime for Vivian. Rhimes is evidently aiming for a Hannibal-style conflict between these two women, but that never really pans out. The depiction of New York glamor doesn’t measure up to similar shows like Gossip Girl either. It makes for some amusing background viewing as a light drama, but that’s a disappointing result for such a notorious real-life scandal.