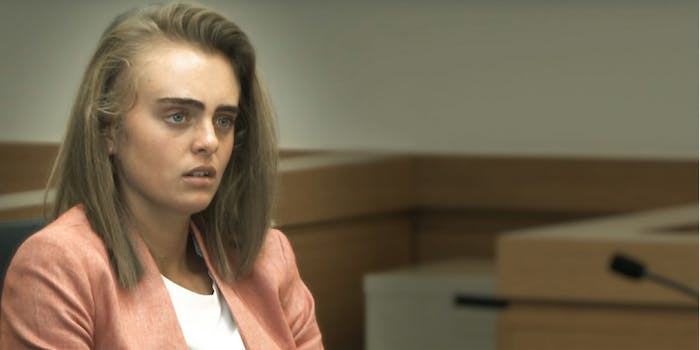 ‘I Love You, Now Die’ revisits the chilling case of Michelle Carter

Filmmaker Erin Lee Carr wants the audience to be a 'mock jury' in the complicated 2014 texting suicide case.

After the SXSW debut of I Love You, Now Die: The Commonwealth vs. Michelle Carter, a new HBO documentary about the texting suicide case of Michelle Carter, filmmaker Erin Lee Carr took an informal poll: She asked who thought Carter should be in jail for the 2014 death of boyfriend Conrad Roy. Less than five people raised their hands. Carr was “surprised, genuinely,” she tells the Daily Dot.

That number might have been higher before the screening. Carter, now 22, was tried and found guilty of involuntary manslaughter in 2017 and just last month was ordered to begin serving a 15-month sentence, but Carr’s documentary seeks to clarify public opinion and misinformation about what happened in July 2014, when the 18-year-old Roy took his life in a Kmart parking lot via carbon monoxide poisoning, allegedly urged on by Carter via texts. The then-17-year-old was painted as a heartless monster who pushed her mentally unstable boyfriend to kill himself, and the media ran hard with that narrative. But as I Love You, Now Die shows, the entanglement was much more complicated.

Carr says that since Carter didn’t get a jury trial, the documentary is a stand-in, with the audience as a mock jury. It’s presented in two parts, laying out the prosecution’s case and the defense, and Carr was granted access to the courtroom proceedings. She also interviews Carter’s lawyer and Esquire writer Jesse Barron, who moved to Massachusetts for five months to cover the case.

The doc shares a few parallels—at least in terms of how the law is applied to what we do virtually—with Carr’s 2015 HBO doc Thought Crimes, which explored the case of Gilberto Valle, a former NYPD cop whose online fantasies about kidnapping, killing, and eating women led to his arrest and 2013 conviction, which was later thrown out. However, Carr says that film “didn’t go well,” and after that, she “just really wanted to make films about women, and complicated women, and what motivated them, and seeing them as three-dimensional humans versus sort of ripped from the tabloids.” (Her 2017 doc Mommy Dead and Dearest explored the case of Gypsy Rose Blanchard.)

As detailed in the film, which Carr started working on in 2015, public opinion around Carter skewed negative, and media and tabloids molded her into a more sensational target. I Love You, Now Die looks deeper into Carter’s own struggles with mental health, something she shared with Roy, who had already attempted suicide several times before his 2014 death. Carr looks at the effects antidepressants had on their communications, though it’s difficult to discern the context of some of their texts, which are used liberally in the doc. They both spoke about struggles with mental health and often their texts would become combative, but they also showed affection for each other—as much affection as two teenagers whose relationship was largely text-based can. Carr interviews defense witness Peter Breggin, a psychiatrist who asserts Carter was “involuntarily intoxicated” by her medication. Carter also had an obsession with Glee, more specifically the relationship between Cory Monteith (who died of an overdose in July 2013) and Lea Michele.

Carr interviews members of Roy’s family and gets into some of the domestic violence issues Conrad experienced at home, but Carter and her parents declined to be interviewed since the case was still ongoing, so we’re left without a deeper sense of who Carter is and what she was thinking. Her conviction seemed to hinge on her texting Roy to get back in his truck after he got scared, though, as the doc reveals, there were no texts that explicitly stated that. What was said during a phone call between Roy and Carter on the night of his death remains a mystery. Still, several media reports ran with the “get back in” text as fact, and that kind of misinformation still clouds the case. Carr interviewed locals during the trial and several people still seem angry at Carter.

“I think any time where our emotions are high, where we feel something terribly wrong has happened, our brain can short-circuit,” Carr says. “And we can let emotions get the better of us. I think when people encounter this story about Michelle, it’s almost as if their critical thinking caps weren’t on, and they weren’t able to see her as somebody who’s struggling with her own mental health issues. It was a far more simplistic narrative to insist she was a pretty, rich, white girl with no problems. She is privileged, she is white, she is beautiful. But she was kicked around pretty much her whole adolescence and could not connect with people. So as a former lonely kid, I just got that, and I saw it.”

I Love You, Now Die gets into the disconnect between words and actions, but still leaves us with questions: Were her suggestions to Roy more out of empathy for someone who was obviously suffering? Were they both trapped in a toxic fantasy world, doomed to a tragic end? Carr hopes people come away with their own opinions, but she also wants people to see them as three-dimensional humans: “I would hope this film fosters a sense of empathy and understanding for Michelle, and empathy and understanding for Conrad, who is no longer here.”

The documentary premiered at SXSW this week. HBO has yet to announce a release date.