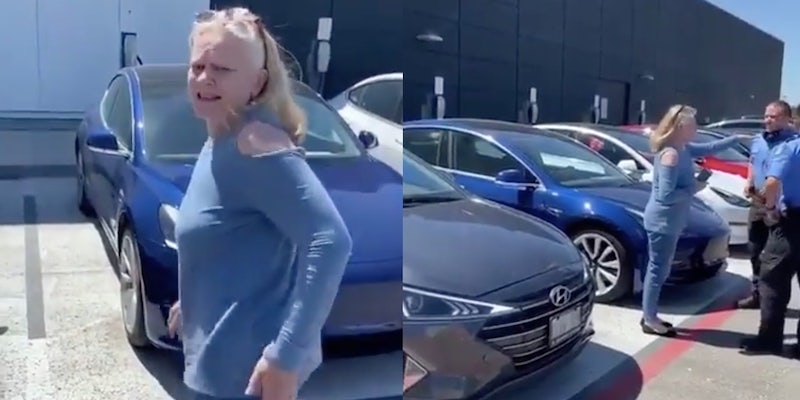 'I do not need this stress.'

A viral video shows a woman going on a rant after she was told she couldn’t park her Hyundai in a Tesla parking spot in Toronto, Ontario.

The video was posted to Twitter and Reddit last week. She’s since been dubbed the “Tesla Karen.”

The video starts with the woman smacking her butt and saying “take this” at the person filming. She then enters her car to grab her phone so that she can also record the incident.

That’s when what appears to be police officers approach the “Tesla Karen” to ask why she was parked in a spot labeled as an electric vehicle charging space.

She explains that she is waiting for someone who was in an accident and in an optometry appointment inside of the shopping mall.

“I do not need this stress. Security can move, and I’ll park there. Or, I’m parking here because nobody’s here,” she says to the officers.

Then, she turns her focus on the person recording her. She gets her phone out and begins recording them. She also starts hurling insults at them and, oddly, brought up Grindr, a gay dating app.

“You’re disgusting, and I’m so sick of these young people who think they’re all that,” she says as she begins recording them. “Nothing better to do with your time because this is what your generation does; You go on Grindr and do hookups.”

She goes on to say that young people show off their bodies and don’t have self respect. The officer cuts her off and tells her that she needs to stop fighting with the person recording.

The officer says she needs to move. He points to signs and says that they clearly mark that the parking spots are for electric charging only.

The video ends with her telling the person filming, “if your’s goes up, mine goes up, and it will have a lot to say.”

In Ontario, Canada, where the incident took place, it is illegal to park a combustion engine car in an electric parking spot.