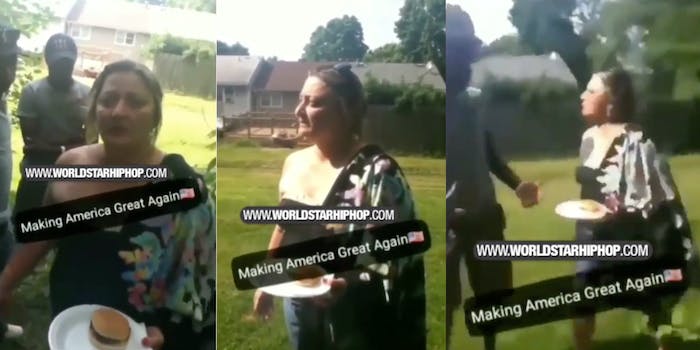 One teen was swatting away a fly and the woman thought he was using gang signals.

A group of Black teenagers was apparently enjoying a day at the park when a white woman started to harass the teens—and accuse them of being in a gang.

In a video of the exchange, the woman claimed one of the boys was making gang signals when he was swatting away a fly that had gone into his eye.

“I don’t need no fucking gangs around here,” she said.

She continues to berate them and questions whether they live in the community. After they tell her they do in fact live there she persists and asks where exactly they live.

“You think we too Black to be living over there?” one of the teens asks.

“No, absolutely not, I have two grandchildren that are Black,” she replies as if her relationship with a Black person would expunge racist behavior.

Throughout the almost three-minute clip, the teens continually ask the woman to leave them alone and to go back to the pool where she came from. But the woman, who seemed drunk according to the boys, wouldn’t go away and at one point her face was very close up to the camera and the boy filming the ordeal.

Video of the exchange was uploaded onto the popular Reddit thread “Public Freakout” this weekend, with the caption, “Karen harassing some black teens ‘I don’t need no gangs around here.'” The clip has 97% upvotes and more than 400 comments. It was also picked up by World Star Hip-Hop.

However, it’s unclear when or where the clip was filmed.

At one point the woman claimed she went over to the group because they were taking pictures. “So what?” one boy said.

When she doesn’t have a response for that the woman doubles down and said someone keeps breaking the basketball net, implying it was one of the teens.

“Have you ever asked your neighbor Bryan? You know he be shooting bb guns and shit. Why do you ask us? Because we’re Black,” one teen said.

Eventually the woman seems to leave, but the incident is the latest example of Black people truly not being able to do the most mundane things in life (like take pictures or swat away bugs) without being harassed or made to feel unsafe by a white person.

Most of the comments under the video are on the teens’ side.

“Call the cops! The highlands got gangs of polite kids loitering in the grass enjoying their summer!,” wrote u/b0ts_.