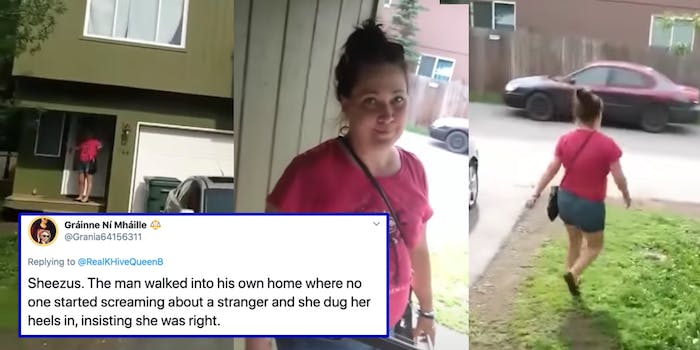 She called the police on him and even insisted he was a drug dealer.

Sometimes it seems as though Black people really can’t do anything without white women finding an excuse to call the police on them.

In a recent viral video, a Black man was simply parked across the street from his own house in broad daylight as he waited for his son to come join him in the car when a white woman approached him to let him know she had just called the police.

It’s unclear how much communication the two had had prior to the start of the video, but the man is still in his car, saying, “I didn’t think this would happen to me” when the woman comes over to announce that the police are on their way.

She then goes up to his house, stands on his porch, and demands that he goes into his house to prove that it’s his.

He obliges, walking right up to and through the front door, and another man standing inside confirms to the woman that he does, in fact, live there.

“This is my house,” he tells her yet again.

Despite being confronted with facts, the woman simply stands on his porch. No apology, no further unwarranted demands, she just stands there shaking her head.

“Another white lady pulling some old bullcrap,” he says.

“Why you don’t think he lives here?” the other man asks her as she finally starts to walk away.

“Well I already called the police,” she calls back.

She continues to walk down the street, presumably back to her own house, yelling profanities at him and eventually insisting, for no apparent reason, that he’s a drug dealer.

“There’s children out here! What’s wrong with you?” he yells after her as she keeps dropping f-bombs despite several young kids on bicycles riding by between them.

“Amazing. You see this stuff on the internet all the time, but you never think it’s going to happen to you at your own house,” he says after she’s gone. “But there it is. There it is.”

It’s unclear at this time where the video originated, and what ultimately happened if or when the police eventually showed up. But if these two really are neighbors as it seems from watching the footage, this whole thing may be about to make this Karen’s home life a fraction as uncomfortable as she just made this man for minding his own business out at his own house.