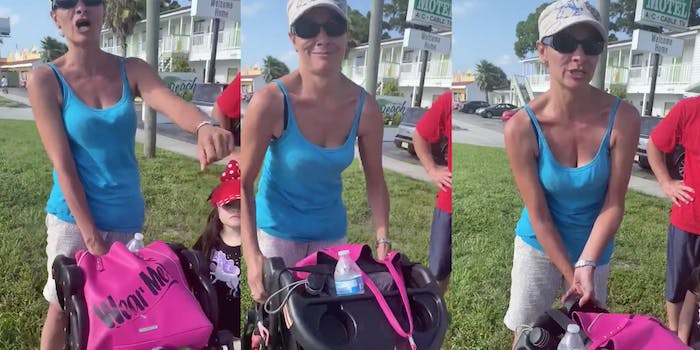 The woman says she can say that because 'she's a a Mexican woman of color, too.'

A Florida woman called a Black woman a “good little slave” for wearing a mask while waiting for the bus—an act health officials have pleaded the public comply with for weeks to slow the spread of the coronavirus.

“You’re wearing a mask like the rest of the slaves out there,” the woman is heard saying in the video.

The racist remark is the latest in a series of outbursts and threats from people who have converted wearing a mask into a political act of defiance. In actuality, wearing a mask is a safety precaution health experts say most everyone should take for their own protection and others.

“You’re telling me a woman of color, ‘Be a good little slave?,” the mask-wearing woman said.

She seemingly pointed this out to emphasize to the woman how awful it is to refer to a Black person as a slave given the country’s racist history coupled with the current civil rights movement, which was sparked by the death of George Floyd, a Black man, at the hands of a white police officer.

Karen tried to reel her insult back in by using her ethnicity as the reason why he comment shouldn’t be taken as racist.

“I’m a Mexican woman of color, too,” the Karen replied.

“It doesn’t matter. You don’t say that,” the woman said.

But just because a person is part of a marginalized community doesn’t mean they can’t be racist. In this instance, the woman attempted to use her latinidad as a shield, but the Latinx community has a deeply entrenched history of anti-Blackness and anti-indigeneity.

“Good example for your children,” the masked woman said sarcastically as they got on the bus.

As of Friday, more than 20 states have issued orders to require people to wear masks in public as the rate of people infected with the coronavirus continues to surge throughout parts of the country, NPR reported.

While Florida is one of the states with increasing cases (it was among the first states to begin reopening) it still doesn’t have a statewide mask order, instead, leaving it up to cities and counties to decide.

But Pasco County, where the incident went down, requires people to wear masks in public spaces, like the bus. So Karen was in the wrong on more than one level.