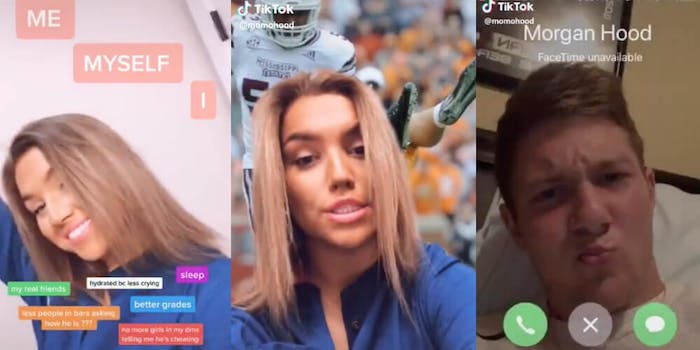 ‘No more girls in my DMs telling me he’s cheating.'

Tennessee Volunteers backup quarterback Brian Maurer’s ex-girlfriend put him on blast in the most Gen Z way possible: by her posting a breakup video to TikTok.

In the video, Morgan Hood shares a scathing video on the social media platform to let viewers know she and Maurer are over—and she’s better off without him.

In the video, Hood is seen participating in one of the latest TikTok trends, in which newly-single women lip sync to “All You Wanna Do” from the musical Six.

The video begins with a photo of the two together with text at the bottom reading, “wait is your ex Brian Maurer?” overlaid.

Next, we see various photos of the two.

We also see a screenshot that shows Maurer pouting after an unanswered FaceTime call to Hood. And finally, there’s a shot of Maurer falling flat on his face during a football game earlier this year.

“Yeah, that didn’t work out,” Hood lip syncs. “So I decided to have a break from boys. And you’ll never guess who I met.” Then, smiling at the screen, Hood lists all the ways she’s better off single.

“Less people in bars asking how he is ??”

“No more girls in my dms telling me he’s cheating.”

Maurer—who dated Hood for less than a year, according to the Daily Mail—responded to the video on Instagram.

“Girls do anything for they 15 seconds of fame,” Maurer posted to his story, along with a red heart emoji.

While Hood has reportedly deleted the video, she responded to any hate she received via her Instagram story: “I did not intend for any of this to happen. I certainly did not send my own TikTok into Barstool and I did not do this for ‘clout.’”

She pointed out that she was only partaking in a trend “that hundreds of other girls” have partaken in.

“I didn’t make it as a crazy ex seeking revenge, and anyone that has ever seen a TikTok should know this. All of it has been blown extremely out of proportion,” she continued. “Trust me when I tell you that having people troll you and say mean things is not fun. It is hard to realize there is another human being on the receiving end of your words. As yes I like to spray tan.”