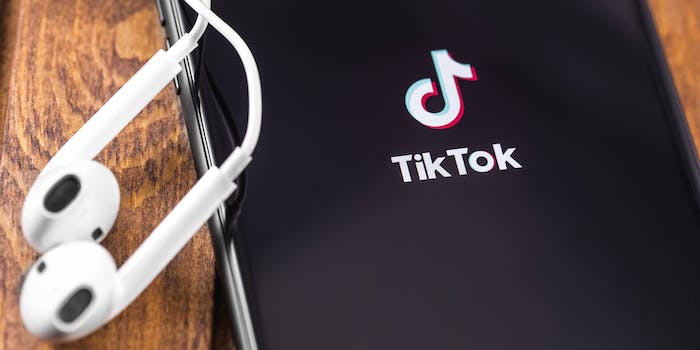 Thanks in part to TikTok, these songs are blowing up.

It’s nearly impossible these days to open your favorite social media app without getting an update on the newest TikTok trend, which often features a catchy track. As a result, a number of TikTok songs reached massive heights this year.

TikTok’s widespread popularity has assisted in getting these songs well and truly stuck in our heads throughout the year. There is even a Spotify playlist dedicated to TikTok’s most popular songs. Thanks to the app’s massive fan base, the soundtracks that grace many of its memes and challenges proceed to blow up online.

In no particular order, here are the 20 most popular TikTok songs of 2019.

Can you believe “Old Town Road” by Lil Nas X took over our lives earlier this year? While the massively popular song was originally released in early December 2018, it didn’t reach widespread fame until it blew up on TikTok in mid-2019. “Old Town Road,” which briefly graced the Billboard Hot Country Songs chart, made Lil Nas X into a household name.

On TikTok, the song serves as the soundtrack to a simple meme. As the song begins, most videos start on a regular TikToker drinking E-girl or E-boy juice. Once their drink is revealed to actually be “Yee-Yee Juice,” however, they transform into exaggerated “cowboy” caricatures. It was one of the trends that brought TikTok to mainstream attention.

Another song that came to define a portion of 2019 is “Truth Hurts” by Lizzo. The song was released in 2017, which makes it an unlikely anthem for 2019, but the world is a strange place these days. Thanks in part to controversy surrounding one of the song’s most popular verses, “I just took a DNA test turns out I’m 100 percent that bitch,” the song reasserted its dominance in April.

The song inspired one of TikTok’s more tame memes. As the first moments of the song play in the background, TikTokers use a Q-Tip to swab the insides of their mouths. Then, as the “DNA test” line comes up, each video reveals what, exactly, the Toker is 100 percent. British? White? An ogre? It all depends on the video.

Mariah Carey’s “Obsessed” may have come out a decade ago, but the song found new life this year thanks to TikTok. This particular trend appears to have reached popularity thanks to a video from user @reesehardy_. Her TikTok, which shows the clearly distraught teen doing a simple dance to “Obsessed,” inspired a hugely popular meme.

The meme even caught the attention of Mariah Carey herself. She participated in the trend, uploading a video of herself doing an incomplete version of the dance and singing along.

Lizzo has had a good year. Another of her popular tracks—2018’s “Boys”—got a second life thanks to TikTok. Her song, which heavily centers around the artist listing types of boys she likes, made the perfect meme template.

The “Boys” meme is more diverse than many trends that TikTok spawned. Videos range from animated goofs to breakdowns of reptiles, rodents, and even the Avengers, all set to Lizzo’s catchy tune.

If not for TikTok, it’s possible many of us would never have experienced Stunna Girl’s “Runway.” The TikTok meme it inspired uses only the first 15 seconds of the song. After a gradual build in the intro, the first lyrics provide the meat of the meme. “Bitch, I look like I’m fresh off the runway. Bitch, I go crazy the dumb way.”

Videos using the song tend to feature young Tokers in plain clothes and little makeup. When the lyrics begin, the Tokers transform into well-dressed, fully made-up versions of themselves. They strut toward the camera, mouthing the lyrics to the song.

Following the massive success of Lil Nas X’s “Old Town Road,” people were eager for a follow-up. Their prayers were answered, to some degree, by the release of Blanco Brown’s “The Git Up,” another track that is loosely country-rap. The song has been described as a sequel to “Old Town Road.”

The meme it inspired started with Blanco Brown himself. He uploaded a video of himself performing a simple line dance to the song, and it blew up from there. People on TikTok promptly jumped on the trend and filmed themselves attempting the dance. Some people came up with complex variations, while others could hardly pull off the original version.

Y2K and bbno$’s “Lalala” may well be the defining track of their careers. The song, released in mid-2019, begins with a short conversation. “Did I really just forget that melody,” one voice asks before another responds “nah, na, na, banananananana.” The song begins in earnest a moment later when the music comes in.

The meme centers around this conversation, typically featuring a Toker talking to themselves. As the music starts, the subject’s makeup and outfit change or a strange position is revealed and they dance and sing along to the track’s first line.

Kyle and Lil Yachty’s second collaboration came in 2018 with “Hey Julie.” The song, which references jewelry and the duo’s fashion, came back around in 2019 thanks to TikTok.

The TikTok trend surrounding “Hey Julie” involves a simple dance. It’s pretty difficult to describe, so you’ll just have to watch it for yourself, but suffice to say nearly everyone on TikTok has attempted it at least once.

The majority of the music-oriented trends on TikTok involve dancing and lip-syncing to popular music. In some cases, the music may not have reached nearly so far if not for TikTok’s influence. As with “Runway,” “Pull Up” by Luh Kel may have TikTok to thank for its mainstream popularity.

The “Pull Up” dance is far more simple than many of TikTok’s most popular trends. Unlike other dances, it mostly remained the same through dozens of videos from different creators.

Billie Eilish’s “Bad Guy” would’ve blown up with or without TikTok’s help, but the platform certainly helped in making it one of her standout hits. The track, released in March 2018, quickly became the soundtrack to dozens of TikToks.

“Bad Guy” turned into less of a meme and more of an excuse to look cute in front of the camera. Most of the videos using the song tend to center around mouthing the words and staring seductively into the camera. A few videos even utilize a simple dance that goes along with the chorus.

“Spooky Scary Skeletons” has been around for a few decades, but not the fast-paced, erratic version that plays in the Spooky Scary Skeletons Challenge. That version comes from The Living Tombstone, an Israeli-American YouTuber whose real name is Yoav Landau. His upbeat, dubstep version of the Halloween classic is the perfect soundtrack to one of TikTok’s standout challenges.

The challenge itself is quite simple. All it requires is a well-choreographed dance of unknown origins—though Rolling Stone did attempt to track it—and the song itself. Many people perform the dance in skeleton attire or their Halloween costumes, but it looks good no matter how you’re dressed.

Vampire Weekend’s “A-Punk” first found popularity when it was released in 2008. It managed another surge in interest when it was certified gold by the Recording Industry Association of America in 2013, and thanks to TikTok it is now experiencing yet another moment in the sun.

The TikTok dance appears to have begun with Toker Emma Chamberlain. The incredibly simple dance’s only requirement is synchronization between one’s hands and feet in time to the music. That’s pretty much it, but damn does it look good.

Thanks to TikTok’s massive reach, it’s common for previously unknown music to find an audience on the platform. While YNW Melly’s “223’s” might’ve eventually reached viral status without TikTok, it skyrocketed in interest thanks to a simple line dance.

Simple but engaging line dances are common on TikTok, as they are easy to master and look great even when doing them alone. The dance for “223’s” is one of the more complicated dances in TikTok’s lineup, but it’s been enjoyed by users all over the globe.

Big, exaggerated movements with plenty of kicks and spins make the “Cradles” TikTok dance one of the platform’s most popular. The song, from Sub Urban, whose real name is Danny Maisonneuve, centers around childhood and never growing up. The dance is more about committing to expansive, over-the-top movements and keeping time with the music.

Not everyone can pull off the “Cradles” dance. It isn’t overly complicated, but without real commitment it just doesn’t look right. Make sure, if you plan to attempt it, that you have plenty of space around yourself. You wouldn’t want one of those kicks to put your foot through the television.

Sometimes simple is superior. Such is certainly the case with the “HBS” dance, set to Lil Keed’s “HBS.” The song comes from his 2019 album Long Live Mexico, and its strong bass and sharp tones made for a flawlessly simple TikTok dance.

Anyone can do the “HBS” dance. Many of TikTok’s dance crazes are simple, so most anyone can enjoy them, but not as simple as this one. All you need is at least three people—any less would mess up the aesthetic—and preferably a set of stairs or bleachers. The lead person begins the dance, with another person, or set of people, joining in on each repeat of “hood, baby, shit.”

Or3O’s “Absolutely Anything” was released back in 2017, and with our short attention span is officially an “old” song. Thanks to TikTok’s “I used to be so beautiful” challenge, however, it’s experiencing a second life.

The challenge is simple and easily performed, like most things on TikTok. The start of the song always features a Toker looking less than their best, sometimes exaggeratedly so. Then the transformation hits, and the Toker emerges in all their made up, well-dressed glory. It’s like a 10 second glow-up.

American rapper and songwriter YBN Cordae is only 22. Just let that sink in for a moment. He released his first mixtape in 2014, when he was only 17 years old. Arguably his biggest hit, “Kung Fu,” has TikTok to thank, at least in part, for its popularity.

The “Kung Fu” TikTok dance has a few different variations. The most simple mostly involves moving one’s arms in time to the music and gyrating the hips when the main beat drops. More complicated versions—with sharp, hyper-specific motions and martial-art-style kicks—are only performed by TikTok’s more talented users.

While it’s not the most simple dance TikTokers have ever attempted, the “Woah” dance is easy enough for anyone to perform. The song, performed by KRYPTO9095 and D3MSTREET, was originally released in 2017. The track gained steam thanks to a dance challenge on YouTube, which made its way to TikTok when the platform blew up.

The dance is simple, and enjoys a few variations. Some uploads feature Tokers doing an actual dance with hard, sharp movements on each “whoa.” Others have users changing their clothes and makeup on each “whoa” or moving their position.

“Lucid Dreams” by Juice Wrld was originally released in 2017 but didn’t reach a wide audience until 2018. It was revived in 2019 on TikTok, where users danced to the first part of the song before miming seizures—and spitting water everywhere—during a trippy, shuddering moment in the song.

The song managed to reach even higher heights after Juice Wrld died after having a seizure in December. Due to the manner of his passing, Tokers believed they’d predicted his death through their TikTok dance seizures.

Many of TikTok’s most popular crazes center around dancing to popular songs. With the “Work” challenge, Tokers changed things up a bit. Rather than dance to “Work” by Iggy Azalea, users have been uploading videos of themselves walking in anything but Louboutins.

The first moments of the song feature Azalea saying “walk a mile in these Louboutins, but they don’t wear these shits where I’m from.” This is the clip  in the TikTok challenge. Videos show users securing a variety of non-footwear to their feet and attempting to walk in them. The videos are ridiculous, charming, and very amusing.