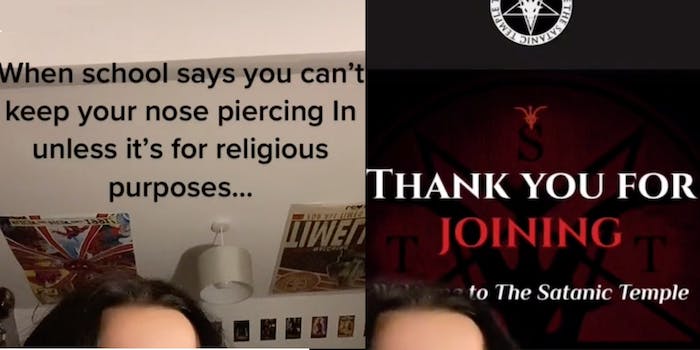 ‘I hope this works’: TikToker joins Satanic Temple to get a religious exemption for school’s piercing policy

The teen's stunt left viewers wondering how they could join too.

A teen is using The Satanic Temple to claim a religious exemption from her school’s piercing policy, and the TikTok video she made explaining how she did it has gained 223,000 views in one day.

TikTok creator @L1lyall3n shared a video with the caption “I feel bad for my teachers,” and commenters are clamoring to find out how to join TST.

“When school says you can’t keep your nose piercing in unless it’s for religious purposes…” a text overlay in the video reads.

The video then shows @L1lyall3n going through the process to join the Satanic Temple, which is a quick process on their website.

The Satanic Temple is a non-theistic religious organization which describes its mission as being to “Encourage Benevolence And Empathy, Reject Tyrannical Authority, Advocate Practical Common Sense, Oppose Injustice, And Undertake Noble Pursuits,” on its website. The Temple has previously filed suit against states which pass legislature that conflicts with its tenets, such as the recent enactment of a Texas law which allows those to be found “assisting and abetting” in an abortion subject to pay $10,000 in damages. According to the Satanic Temple website, the organization “confronts religious discrimination to secure the separation of church and state and defend the Constitutional rights of its members.”

One commenter wrote that she’d done something similar in school by claiming a cultural exemption.

“In sixth form, I wasn’t allowed mine so I just said it was for cultural reasons,” they wrote. “Since I’m POC, they can’t really question it.”

Another, who wrote that they were a teacher, said they were considering it as an option to keep their piercing at work.

The video was stitched by piercer @lynnloheide, who reminded her followers that a similar act was done by a student in the early aughts who used the Church of Body Modification to seek a religious exemption and keep their piercing.

“When I tell you the speed with which I leapt out of bed to make a response to this Tiktok when I saw it,” @lynnloheide said. “First of all, to the person who made this TikTok, you are so smart, I love this, I hope this works for you. I hope your school lets you keep it in. For everyone who follows me and likes body piercing things and was not around in the early 2000s, in like 2007 or 2008, because this is a continuing problem, something called the Church of Body Modification was started.”

“It is a recognized religious institution, it is an actual church. Its tenets are practicing body modification as a way to strengthen the body, spirit and soul, and people who are member have a religious right to their piercings and tattoos. A student was actually a member of the church of body modification, who got suspended from school for having a piercing. The ACLU took that to court and the court ruled in her favor.”

The Daily Dot has reached out to @L1lyall3n on TikTok via DM, as other social media accounts could not be located. We have also reached out to The Satanic Temple.