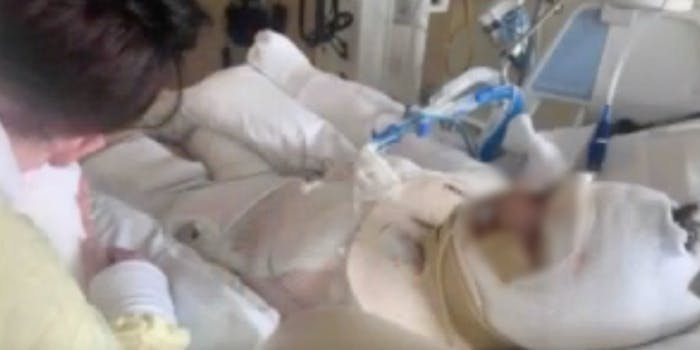 Teen girl hospitalized with third-degree burns after copying a TikTok

'Because of the burns, she's going to have limited mobility. That is just going to be a lifelong thing.'

In another story of a child being seriously injured via an ill-advised idea from TikTok, a report from Portland says a 13-year-old suffered third-degree burns after copying a dangerous TikTok video.

“I have parental controls on all her stuff, and it still wasn’t enough,” said Kimberly Crane to station KATU regarding the state of her teenage daughter, Destini. The girl had apparently used flammable liquid to draw shapes in a mirror, which she then lit on fire. According to ABC News, she went on to suffer third-degree burns on her neck, chest, stomach, and arm, requiring three skin-grafting surgeries.

“They’re not TikTok trends that everyone knows about. They’re under the radar, dangerous things like lighting something on fire in the bathroom,” Destini’s sister, Andrea, told KATU. “She’s really into special effects. So she really likes things that look like they’re underwater or things with fire in them. It looks cool.”

On May 13, Crane says she heard Destini scream her name, went to the bathroom, and saw her daughter ablaze. Because of the burns, Destini cannot speak; the exact timeline of events isn’t yet known.

She is currently stable in intensive care and will likely require several months of ongoing rehab and therapy for her injuries.

“Because of the burns, she’s going to have limited mobility,” Andrea Crane said in an ABC/KATU interview. “That is just going to be a lifelong thing, of her doing physical therapy to keep her mobility.”

Though Crane isn’t blaming TikTok directly for the burns, she believes uploaders need to bear accountability: “They’re not thinking about how these young kids are doing the same thing they’re doing and getting hurt doing it.”