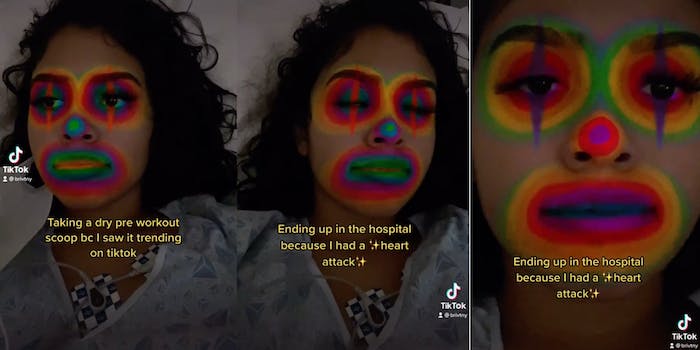 'I started sweating a lot and was drenched even though I was wearing a bikini.'

A 20-year-old OnlyFans creator suffered a heart attack after participating in the TikTok “dry scooping” challenge.

Nearly every TikTok trend that crops up has the potential to be dangerous, from the clearly hazardous “skullbreaker” challenge to the less obvious “buss it” challenge. Once of the platform’s latest trends, the “dry scooping” challenge, shares some real estate with the exceedingly bad idea that is the “cinnamon challenge.”

The cinnamon challenge has come back around several times since its initial hay day in the early 2000s. It challenges participants to eat a full spoonful of ground cinnamon in 60 seconds with no liquid to help wash it down. The trend is exceptionally dangerous and can lead to gagging, vomiting, breathing difficulties, and, in extreme circumstances, a collapsed lung.

The “dry scooping” trend takes a similar route, but it purports to help boost the energizing effects of protein powder prior to a workout. It pushes participants to consume a spoonful of straight protein powder before hitting the gym, alleging that it will result in a more productive workout.

OnlyFans creator Briatney Portillo detailed the dangers of this challenge when she attempted it before a shift at her job. Before heading to start her workout, she swallowed a scoop of powder and headed to the gym.

“After I took the pre-workout, I started to feel tingly and itchy all over my body, which wasn’t a good feeling, but I Googled it and it said that was a normal side effect,” Portillo told the Daily Star. She pushed through the discomfort and began her workout but soon “started to feel a heavy feeling in my chest and slight pain.” She ignored these symptoms as well, thinking they were “maybe anxiety or a bad panic attack,” and so chose to “ignore it and push through my workout.”

Portillo managed to polish off her workout without too much discomfort, and the chest pain eased as the day went on. So she headed to her job, where she works as a dancer, and prepared for her shift.

Once she started changing for work, however, she again began experiencing symptoms. Her body got hot, despite the chilly changing room, and she began to sweat.

“I started sweating a lot and was drenched even though I was wearing a bikini,” Portillo said. “Then my chest pain came back and this time it was more intense. The pain went to my back and to my left arm and my left arm went slightly limp, so I knew those were symptoms of a heart attack.”

Thankfully, because Portillo recognized the reaction as signs of a heart attack, she called an ambulance. When she reached the hospital, nurses were initially hesitant to label the condition a heart attack due to her young age. Tests ultimately confirmed that it was, in fact, an NSTEMI heart attack. These thankfully cause little long-term damage to the heart muscle, which is good news for Portillo.

She informed viewers in a followup TikTok that she took the Redcon1 Total War pre-workout.

The hospital cleared Portillo to return to her workouts within three to four days but advised her to thoroughly mix any pre-workout with water before consumption—or, preferably, to avoid it entirely. They also advised her to avoid caffeine for the near future.

Portillo noted that she felt it was important to share her story, because, as a 20-year-old, she felt something like this wouldn’t happen to her. But we all live in mortal bodies, and we must be careful how we treat them.

“I just want people to be careful with what they’re consuming. Just because you see it online, even if it’s ‘fitness influencers’ doing it, doesn’t mean it’s safe,” Portillo said.