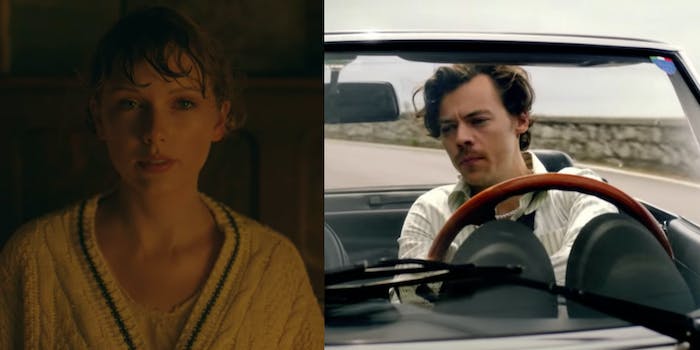 No, that's probably not what 'no body, no crime' is about.

Taylor Swift is known for leaving tons of “Easter eggs,” clues about her life, for fans in her work. And the eggs in her latest album, evermore, are as abundant as ever. But this time, fans gathered their own evidence to support a bizarre conspiracy theory—that Taylor Swift and Harry Styles committed vehicular manslaughter together.

It’s not clear where this theory originated, but fans have run with it. They have sourced all the songs by Swift and Styles that they think reference the “manslaughter” to back up their theory.

Swift and Styles dated for a brief period of time in 2012. It is common knowledge among swifties that her album 1989 is about Styles. Fans theorized that “Welcome to New York” means the alleged murder took place in New York City, and they are convinced the song “Style” points to Harry Styles’s poor driving, which apparently caused the alleged accident.

Additionally, fans think Swift’s “I Know Places” is about finding a place to hide a dead body, and “Out of the Woods” is about being unsure if they got away with the “crime.”

Styles’ fans are also in on the conspiracy and have pointed out many of his songs fit it. Fans believe “Ever Since New York” and “Two Ghosts” are about his regrets from allegedly hitting someone with a car.

Swifties also think two of her songs from reputation, “I Did Something Bad” and “Getaway Car,” are also about the “vehicular manslaughter.”

While it’s unclear how long the conspiracy has been around for, it seemingly came to a head with evermore. The song “no body, no crime” with HAIM is really swaying fans’ opinions. The title is self-explanatory and fits the theory.

HAIM posted a photo on Instagram captioned “get in loser we’re gonna go find his ass at Olive Garden,” which led fans to believe the “body” is behind an Olive Garden.

Swift loved the post so much, she asked if she could get it “tattooed on her face.” Some fans now think Swift and HAIM are in on the vehicular manslaughter conspiracy and are joking about it.