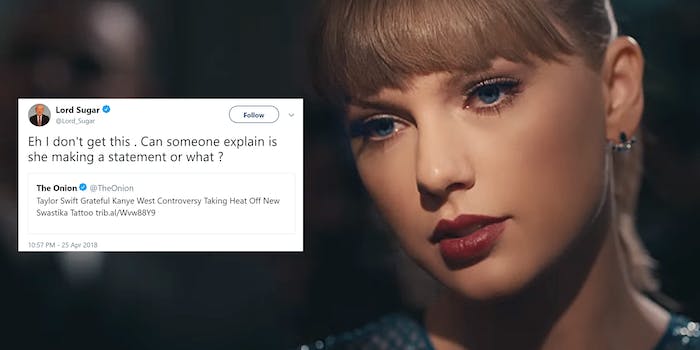 Repeat after me: 'The Onion' is satire.

The Onion has been publishing satirical news online since the ’90s, but there are still many people who are still duped daily by the site. Every time the Onion posts one of its articles on a social network, there are at least a handful of people who think the story is real. It’s become sort of an accidental test that measures the internet’s ability to perceive satire and/or fake news: Will people believe any headline, even ones that seem wildly untrue?

On Wednesday evening, after Kanye West’s day of tweeting support for both President Donald Trump and Peter Thiel, the Onion posted a Photoshopped image of Taylor Swift with a swastika face tattoo and the headline, “Taylor Swift Grateful Kanye West Controversy Taking Heat Off New Swastika Tattoo.” There was nothing more to the story. That’s it: commentary with a headline and a photo. It’s a typical joke format for the Onion.

Obviously, this is a fake story. Even if you’re unfamiliar with the Onion, this tattoo looks fake. And Swift would never get a face tattoo—much less one of a swastika. But English businessman Alan Sugar apparently thought the story was real. “Eh, I don’t get this. Can someone explain is she making a statement or what?” he tweeted.

Eh I don't get this . Can someone explain is she making a statement or what ? https://t.co/C0zBVIcuQs

The epic thread on this tweet is an amazing portrait of what happens on Twitter on a regular basis. There are people criticizing Swift for “making a statement” with a horrifying tattoo. There are people ridiculing both Sugar and the other commenters who believe the story is real. And then there are people jokingly claiming to be Swift, or her manager, or a family member.

It defies me, Lord Sugar! I can only say that if there’s some supportive message in there, it’s lost on me! Thoroughly tasteless. Corbyn would probably like it.

Everyone (or, at least those who know the Onion is satire) seemed to enjoy the thread.

This whole thing is amazing. The replies, the original tweet. It's gold. https://t.co/hoe13E0fH7

It doesn’t look like our problem with people not being able to distinguish a real news article from a fake news article is going away anytime soon. At least on social sites like Twitter, we can call out people who take satire seriously and have some fun in the process. One day in the future (hopefully, maybe??), we’ll all read articles and check their sources before retweeting them. But at this point, that’s about as likely as, well, Taylor Swift with a face tattoo.