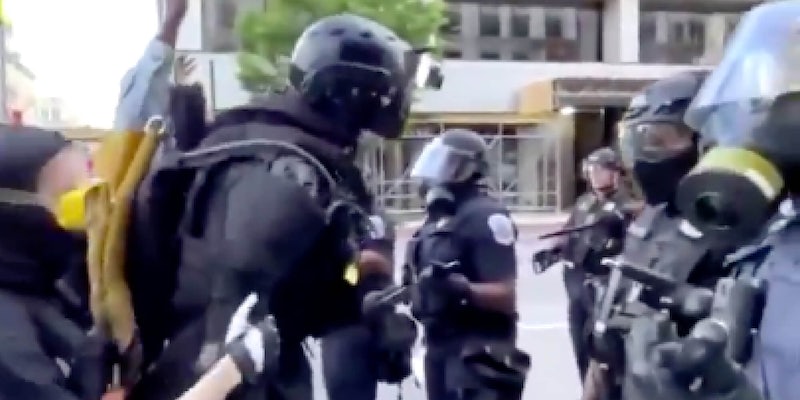 People are simping hard for this ‘7-foot-tall’ anonymous protester

Videos are circulating of a Black Lives Matter anonymous protester who is so tall that he allegedly intimidates the police. People online are responding to the videos by creating fancams and thirsting over him.

The protester, who people presume to be a guy and estimate his height at 7-feet-tall, remains disguised by his decked-out riot gear. He has been seen in a variety of videos confronting the police at protests. In one video, he gets in officers’ faces and points at them (it is unclear what he says to them). In another, he can be seen throwing a presumed gas canister back at them.

Twitter users are saying he “could step on me” and “snap me in half like a KitKat.” Others wrote they fell “in love” after seeing him “bullying the police” and declared him to be a “king” participating in “king activities.”

“I am so beyond aroused by that 7 foot spec ops guy who was intimidating cop(s) the other day,” one user wrote, adding that he is located in the D.C. area. (Others have also claimed this to be the location he is protesting at.)

Most users are declaring their love for him under the hashtag #specopsguy.

The anonymous protester is also being simped hard for over on TikTok, where users are making fancams of him, set to everything from Two Feet’s “Go Fuck Yourself” to LIL DARKIE’s “METHHEAD FREESTYLE.” (Fancams are visual compilations made by stans, and the subject is whomever they are stanning.)

Some are urging people online to refrain from trying to find out the anonymous protester’s identity. “PROTECT HIM AND HIS IDENTITY LIKE HE IS PROTECTING THOSE PEOPLE,” one wrote.

People on both platforms similarly simped over Anonymous following its “return” over the weekend. In one of the videos, the anonymous protester can be seen wearing a camera on his helmet and a badge of a Guy Fawkes mask, most commonly associated with Anonymous. Some have even alleged he is with the loose collective of hacktivists, but that remains unclear.