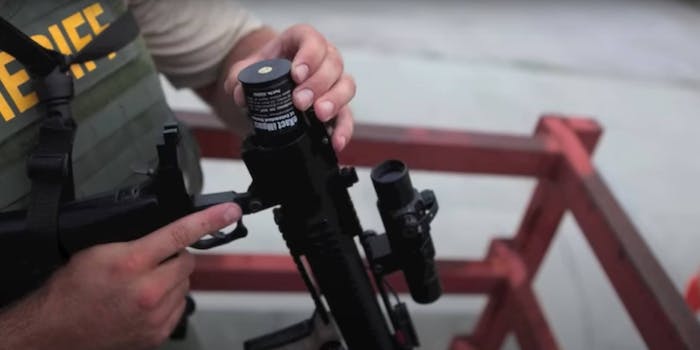 Why ‘rubber bullet’ is a misleading term

The phrase “rubber bullet” implies something small, bouncy, and non-threatening; a very misleading image. These large, dangerous projectiles can cause major injuries, including blindness and organ damage. Around 3% of people hit by a plastic bullet die from their wounds, which makes sense when you consider it for what it is: a fast-moving chunk of plastic.

Also known as baton rounds, these projectiles are often deployed by police to subdue crowds of protesters. Along with tear gas and pepper spray, they’ve been used on protesters, journalists, and unrelated bystanders during the George Floyd protests, resulting in numerous injuries documented on social media and on live TV. They can range from solid plastic projectiles slightly smaller than a Coke can, to smaller foam bullets designed for close-range attacks:

Once again, the word “foam” here sounds misleadingly soft. The foam bullet pictured above is described as a “pain compliance option” by its own manufacturer.

At minimum, these projectiles will cause painful bruising if you get hit. If you’re hit in the face, you may be permanently disfigured or lose an eye. Speaking to the Cut, photojournalist Andre Mercharles described his experience of being shot in the leg this week: “I’ve gotten hit by a baseball before and this is 100 times worse.” His account goes into detail about how traumatic the experience was, along with being physically painful. When police shoot less-than-lethal projectiles, they’re trying to cause pain, panic, and terror. Sanitized phrases like “crowd dispersal” don’t do it justice.

Invented for the British army to use against civilians in Northern Ireland, baton rounds were originally designed to be fired at the ground, ricocheting up to hit people at a slower pace. However, they are clearly being fired straight at people’s bodies during the current Black Lives Matter protests. There are so many reports of major facial injuries (such as photojournalist Linda Tirado being blinded in one eye) that some police must be aiming at people’s heads on purpose. To reduce the risk of head and eye injuries, protesters should wear helmets and non-shatter goggles, a widespread trend during the Hong Kong protests last year. Some people are also using makeshift shields.

The past week of protests are ending a lot of misconceptions about supposedly “non-lethal” weaponry, as protesters and bystanders find themselves surrounded by tear gas and projectile weapons. We’ve seen several viral photos illustrating the actual size of a plastic bullet, which is usually about 40mm in diameter. (This photo keeps being reposted, but it appears to originate from a historical tour of Belfast, not a present-day American street protest.) The LAPD’s official inventory website includes photos of 40mm plastic projectiles with round, blue foam tips, matching this TikTok from someone who filmed LA police shooting two peaceful bystanders:

When discussing the weapons used by law enforcement during these protests, phrases like “rubber bullets” don’t accurately convey reality. The same goes for “non-lethal.” Police and weapons manufacturers use more straightforward terminology. “40mm” reflects the traditional way of describing a bullet size. “Less lethal” is more accurate than “non-lethal,” because these projectiles can kill people. “Blunt impact munitions” is a more realistic description than the soft-sounding “rubber bullet.” Likewise, “tear gas” sounds friendlier than “chemical weapon banned by the Geneva Convention.” These weapons are dangerous, something that many Americans are now discovering firsthand.