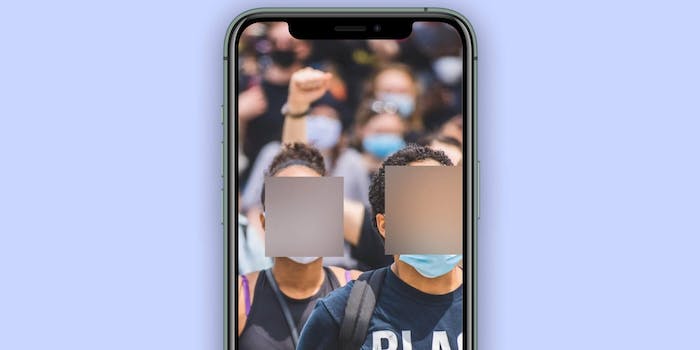 You can now blur faces in photos on Signal

Signal linked the new tool to protests going on across the country.

Signal, the popular encrypted messaging app, announced that it is introducing a face-blur tool that allows users to obscure faces in photos taken on it.

The tool comes as downloads of Signal have ratcheted up amid protests across the country against police brutality and racism after the death of George Floyd, who was killed by a police officer.

Encrypted messaging apps have been recommended for people protesting, as they can help prevent police from intercepting messages during surveillance of protests.

In a blog post, Signal linked the protests to the new face-blurring tool, adding: “One immediate thing seems clear: 2020 is a pretty good year to cover your face.”

“Right now, people around the world are marching and protesting against racism and police brutality, outraged by the most recent police murders of George Floyd and Breonna Taylor. At Signal, we support the people who have gone into the streets to make their voices heard,” the blog post reads.

“Many of the people and groups who are organizing for that change are using Signal to communicate, and we’re working hard to keep up with the increased traffic. We’ve also been working to figure out additional ways we can support everyone in the street right now.”

Police and federal law enforcement have been known to surveil protests on social media, and activists have pushed online to blur photos of protesters to make it harder to identify people in photos and face retaliation.

The face-blurring tool is part of the latest version of Signal for Android and Apple devices. When editing a photo in the app, users will see a new icon that allows for faces to be blurred out.

Signal and other encrypted messaging apps have seen a spike in downloads in recent weeks. Recode reported on Tuesday that Signal saw 121,000 downloads since May 25, according to Apptopia.