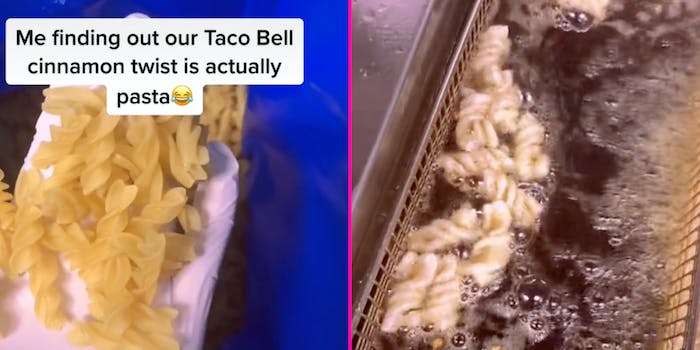 ‘Just now finding out they fried pasta’: Taco Bell worker shows how cinnamon twists are made in viral TikTok

The twists look like pasta, but you won't be able to recreate these with rotini.

A Taco Bell employee has gone viral on TikTok for revealing that chain’s cinnamon twists are made out of a pasta-like material. This is not the first time the ingredient has made waves on TikTok.

The video shows the TikToker making cinnamon twists at his Taco Bell job. Viewers can see him holding what appears to be a rotini-like pasta and popping them in the deep-fryer to make the franchise’s signature cinnamon twists. His video received over 1 million views since posting two days ago.

A text overlay narrates: “Me finding out our Taco Bell cinnamon twist is actually pasta. I been working here for almost three months and just now finding out they fried pasta.”

This revelation has popped up on the internet before, to similar astonishment. The Daily Dot previously reported that the twists are not actually made of rotini, rather they are made of a mixture of yellow corn meal, wheat and rice flour, and salt. People have recreated the snack at home using duros.

Still, many commenters expressed shock over the video.

“I was shocked when I found out too. The beef is froze, they don’t bake the taco shells, and the lettuce be old don’t get me started!!” @diamonddontrice said.

“Bro when I found that out I was like [laughing emoji],” @rudytheweeb said.

“This comment section is the reason I don’t eat Taco Bell no mo,” @vantaesvape said.

Others said it was old news and shared their failed experiences using regular pasta to recreate the twists.

“If you wanna do this at home regular pasta doesn’t work. It looks like pasta but these things are actually duros which are different,” @shaquille._oatmeal said.

The Daily Dot reached out to @gasswaay.trae via TikTok message for comment.