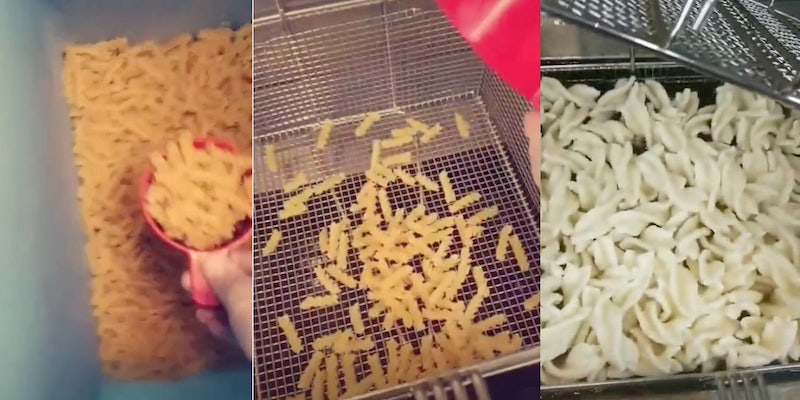 Viewers are in awe of a viral TikTok showing how Taco Bell cinnamon twists are made.

Posted by sports journalist Camryn Justice, the TikTok has racked up over 14 million views on the platform. The video shows a person scooping up what looks like rotini and tossing them in a deep fryer. The “noodles” puff up almost instantly, taking the shape of the cinnamon twists we know and love. The caption reads, “The first time I saw Cinnamon Twists being made I lost it.”

It appears others are losing it too, with folks expressing their shock in the comments.

“The hell they ain’t,” one person said in disbelief.

“I COULD BE MAKING THESE AT HOME THE WHOLE TIME???!??” another questioned.

Yes, the twists can be made at home but not with your average rotini noodle. If you try frying a normal piece of rotini, it won’t turn into a puffy, crunchy snack. Instead, it just burns.

In a statement to Delish from last year, representatives from Taco Bell said:

“While our Cinnamon Twists may have the shape of rotini, you won’t get very far frying traditional pasta at home. The twists are a mixture of wheat flour, yellow corn meal, rice flour and salt.”

However, Justice, whose page is full of at-home Taco Bell recipes, shared that folks can make a version of the twists at home using “rice/wheat noodles or duros”—a puffed wheat snack. She posted a follow-up video for the viewers who thought her claim was fake, testing regular rotini, uncooked Taco Bell twists, and wheat chicharrones. The regular rotini, as predicted, burned when fried and sunk to the bottom of the pot. The other two ingredients puffed up.

In a comment, Justice shared a final tip for finishing the DIY twists off: “The key is to sprinkle your cinnamon sugar mixture on right after taking them out of the oil so it sticks!”