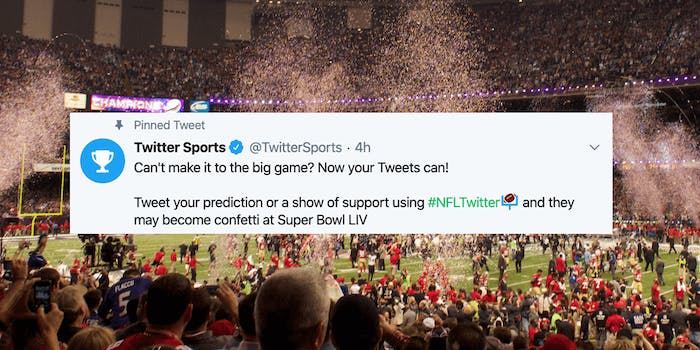 The digital world is set to collide with the real one at Super Bowl LIV, where confetti made from actual tweets will rain down on the field.

In a tweet sent out by the NFL on Wednesday, the sports league announced that users could potentially have their tweets included by sending out a message alongside the hashtag #NFLTwitter.

Send a message to your team using #NFLTwitter, and you might have YOUR Tweet featured on Confetti in the #SBLIV Celebration. pic.twitter.com/JaFNZ6DpXg

The tweets will be printed onto small strips of paper and showered upon either the San Francisco 49ers or Kansas City Chiefs, depending on which team is victorious.

Ian Trombetta, NFL senior VP of influencer marketing, believes that the celebratory act will be a hit among fans.

“We worked with Twitter to really maximize those opportunities to find new ways to engage with our fans,” Trombetta said. ” Confetti tweets, that’s going to be something that’s really special [that will] captivate followers on Twitter by bringing to life this analog moment and this emotional moment.”

“And appropriately they will finally end up in the trash, where most of them belong anyway,” Twitter user @Ohio_Harris said.

And appropriately they will finally end up in the trash, where most of them belong anyway… 🚮

Dumbest idea I ever heard.

Always wondered how you could make confetti a more wasteful way to celebrate.

And although the hashtag is being used by some fans to send out tweets related to football, many others have hijacked the trend to send out a much different message. Unsurprisingly, the “Epstein didn’t kill himself ” meme seems to be the most popular.

Other ideas were less controversial, but nonetheless a troll on the Twitter-NFL partnership.

“This is a piece of confetti,” Twitter user @DyingMeme_ said.

#NFLTwitter this is a piece of confetti

If you pick this up you are going to die #NFLTWITTER

While details are scarce thus far, it seems likely that the NFL and Twitter will be screening which tweets become confetti. So don’t expect to see Epstein jokes at the big game.

The confetti tweets will be printed up until the end of the game, meaning conversations made on Twitter during the Super Bowl have a chance of being included as well.