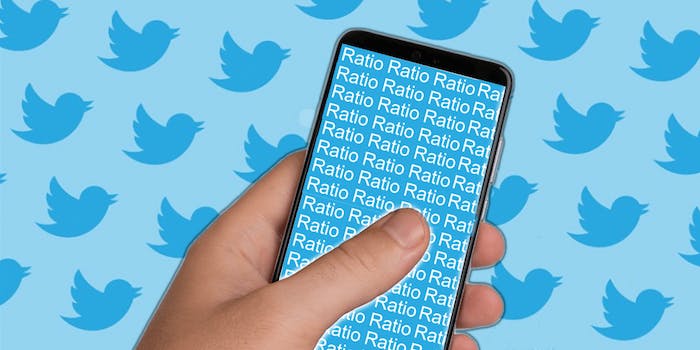 The site is experimenting with new features that let users limit who can reply to their tweets.

Twitter is planning to roll out several new experimental features that could kill off the ratio.

The features, announced Wednesday by Twitter’s director of product management Suzanne Xie, will let users choose who exactly can reply to their tweets.

When composing a new tweet, users will be presented with a feature known as “conversation participants” that provides four different options. The first, known as “Global,” lets anyone reply as normal. The second, “Group,” only lets users you follow and mention in the tweet respond. The “Panel” option only allows for those you mention, and “Statement” blocks anyone from responding at all.

.@Twitter will experiment with limiting replies with 4 options in an effort to combat online abuse.

GLOBAL, lets anybody reply, GROUP is for people you follow and mention, PANEL is users you specifically mention in the tweet, and STATEMENT will disable all replies. pic.twitter.com/0Z7Iihx4QQ

Twitter says it will begin experimenting with the feature in the first quarter and that minor tweaks will be made based on the trial run before “conversation participants” is released to all users.

Speaking with the Verge, Xie specifically cited the ratio, which occurs when a tweet is inundated with vastly more criticism than likes, as one of the reasons behind the impending update.

“Getting ratio’d, getting dunked on, the dynamics that happen that we think aren’t as healthy are definitely part of… our thinking about this,” Xie said.

While the feature could cut down on harassment, numerous unintended consequences could arise as well. Not only could the feature stop users spreading misinformation from being called out, but it could make the problem of ideological echo chambers even worse.

When confronted about these concerns, Xie told the Verge that the company was looking into the issue but suggested that users could always rely on the quote tweet.

Users on the platform, as usual, seemed less than impressed with the social media site’s plans. Only time will tell whether the function actually ends up producing a net positive.