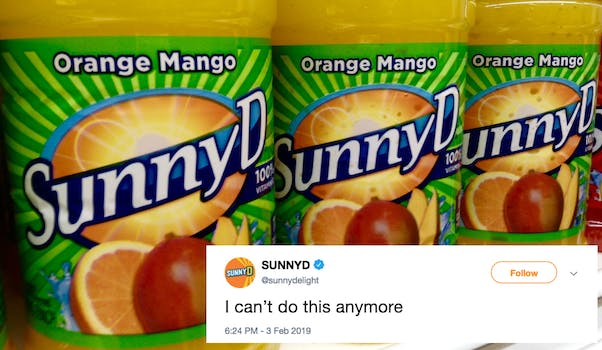 Our childhood snacks talking to each other on Twitter is cute, but using depression as a marketing tool is not.

Many brands are desperately trying to be Extremely Online and engage with their followers on social media in the same way influencers do. However, the difference is that brands are not people. Sunny Delight is an orange juice, but during the Super Bowl on Sunday, their official account tweeted, “I can’t do this anymore.”

I can’t do this anymore

Either way, other brands came out of the woodwork to offer their support for Sunny D.

Can I offer you a tissue?

Mood last night. All good MP thanks for checking in ily

Other people took the tweet and made it a meme.

*10 minutes into my new diet*
Me: https://t.co/kjaJITjEnK

college: *presents me with a minor inconvenience*

When you thought you could handle getting roasted in group chat, but it’s been a rough day at work and the jokes keep coming https://t.co/dva9LyRhKG

Little Debbie stepped in with some mental health tips, which is when the cryptic tweet took a turn. While the person tweeting for Sunny D may not have intended to open a conversation about depression and mental health, it was interpreted that way.

Please just stick to posting about how your snack cakes have more chocolate in them now or whatever pic.twitter.com/To74I9hEdl

“At the end of the day, consumers are people. And people crave authenticity. It’s what they look for in their relationships, their entertainment, and, yes, their brands. Which is why the orange juice account pretends to have depression now, and everyone likes it, and it’s good.”

At the end of the day, consumers are people. And people crave authenticity. It's what they look for in their relationships, their entertainment, and, yes, their brands. Which is why the orange juice account pretends to have depression now, and everyone likes it, and it's good. pic.twitter.com/9fNOLZPY1z

Actually, it’s not good. The conversation about mental health has opened up with millennials in the last few years. We’re finally talking openly about it, but when we said we wanted to be able to be open about mental health, I’m not sure we meant that we wanted orange juice to pretend to be depressed. Our childhood snacks talking to each other on Twitter is cute, but using depression as a marketing tool is not.

The internet is on high alert for cryptic tweets like this. Comedian Pete Davidson wrote a similar message on his Instagram last year that said, in part, “I really don’t want to be on this earth anymore. I’m doing my best to stay here for you but I actually don’t know how much longer I can last.”

The post was taken seriously and prompted friends, family and fans to respond. After people checked on Davidson, it turned out he was OK. However, when a brand makes a post like this it makes light of people who are actually struggling.

The backlash on Twitter echoed a similar sentiment. Brands should not be using depression to relate to millennials and Gen Z.

*asking for help at the grocery store* excuse me, which of these flavoured orange drinks has depression?

If brands want to get in on bringing awareness to mental illness, they should look to Hulu. The streaming service released a video after the Super Bowl starring the Instagram-famous egg, who opened up about the pressures of social media and mental health. The video ended by directing viewers to the nonprofit Mental Health America. Hulu wasn’t pretending that the streaming service was having a depressive episode like Sunny D and other brands. While they did personify the egg, they were upfront with their intention in the video. The ad had a clear message and provided helpful information for people who may be struggling.

Sunny D did not respond to a request for comment.

If you are dealing with mental health issues and need someone to talk to, please check out Mental Health Resources.