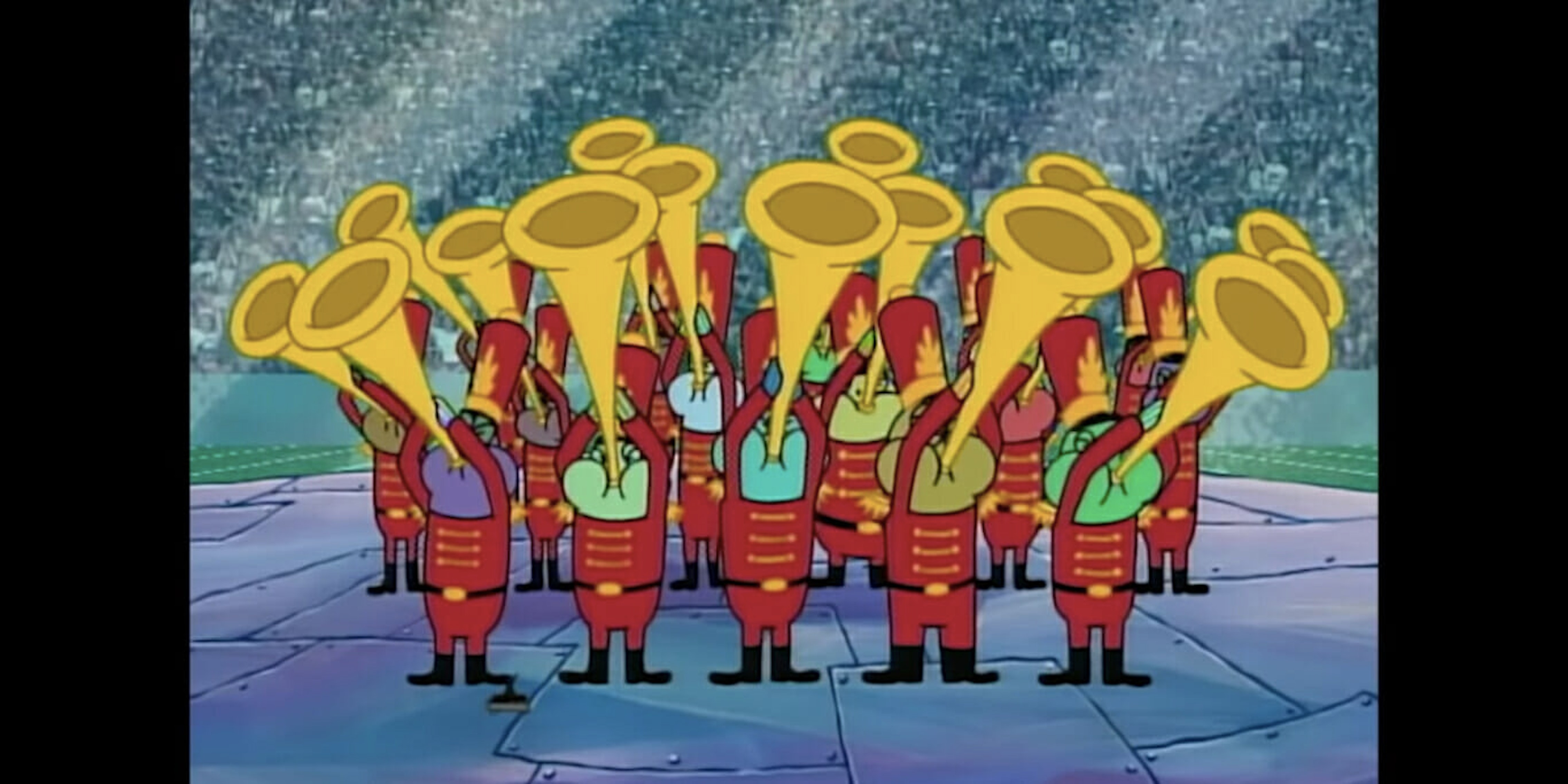 So the SpongeBob SquarePants tribute that fans have been speculating about and clamoring for actually happened at the Super Bowl halftime show, but not in the way they expected. A clip from the animated series’ popular “Band Geek” episode was used to open Travis Scott’ performance of “Sicko Mode.” The short clip included Squidward assembling a marching band for Bikini Bottom’s “Bubble Bowl,” which is their version of Super Bowl.

But it appears organizers lifted the mashup idea from a college student’s viral tweet—and fans have noticed.

The halftime tribute did not showcase the song “Sweet Victory,” from one of the most famous episodes of the animated series. In the online petition for a “Sweet Victory” tribute at the halftime show following SpongeBob creator Stephen Hillenburg’s passing in November—which has since gathered over 1.2 million signatures—petition starter Israel Colunga posted this update: “Sweet Victory (sort of). We did it. Even though we got YEETED with that ‘Sicko Mode’/’Sweet Victory’ mashup, it’s still crazy to think that 1.2 MILLION people signed a petition to get Spongebob’s face on national television. I know Stephen Hillenburg would be extremely proud and honored. Let it be known that 2019 was the year Spongebob reigned supreme at the Super Bowl.”

While fans celebrated the SpongeBob shoutout (some even think it upstaged Maroon 5’s performance), some people on Twitter believe user @anthonytrucco should be credited for the SpongeBob-“Sicko Mode” mashup idea. Trucco, a UC Santa Barbara student who’s a self-confessed SpongeBob superfan, first posted the mashup in September. He retweeted it after the halftime show, saying “No credit. No payment. No nothing. Everyone please RT until @NFL @NFLonCBS @CBS @nflnetwork addresses me. Thank you.”

(He has since updated his profile to read “Super Bowl LIII Halftime Performer.”)

The original post has since garnered over 412,000 likes and over 201,000 retweets. Even Nickelodeon and the official SpongeBob Twitter account acknowledged the idea back in September, with @SpongeBob tweeting “Well… looks like we found the next Bubble Bowl performer!”

Well… looks like we found the next Bubble Bowl performer!

Perhaps Trucco’s version was one of the memes CBS Sports referred to in its report, acknowledging how the SpongeBob-“Sicko Mode” mashup has taken over the internet: “But, like many SpongeBob references, it has recently regained popularity and entered meme culture thanks to the internet using it with Travis Scott’s mega hit ‘Sicko Mode.’ As it so happens, Scott will be joining Maroon 5 on stage as a guest performer at halftime. Perhaps the rapper will utilize the song as he takes the stage?”

As we have all witnessed, Scott did just that.

It’s hard not to notice the opener’s similarity to Trucco’s mashup—in the beginning, that is. While both open with Squidward and the animated marching band playing the song’s intro and showcasing the rapper’s vocals, we don’t actually see SpongeBob lip-syncing “Sicko Mode” at the Halftime Show.

Trucco’s version showcased a clip from the actual “Band Geek” episode where Squidward appears to be quivering and eager to get the performance “over with.” Meanwhile, the Super Bowl version used Squidward to actually introduce Scott and ended with a quick glimpse at the Bikini Bottom’s marching band “playing” a few intro notes from “Sicko Mode” before an asteroid appears to fall down from space onto the stage and Scott begins rapping.

In a statement to the Daily Dot, Trucco said he didn’t expect that his idea to create the SpongeBob-“Sicko Mode” mashup would go viral: “The video took off faster than I ever expected and before I knew it I was getting hundreds of thousands of likes… Since its creation, thousands of people have teasingly joked at the possibility of my video being used in Super Bowl LIII this year. However, despite these predictions, no one had ever reached out to me on behalf of Nickelodeon, SpongeBob, Travis Scott, CBS, FOX, or the NFL, so I had no reason to believe that this was the case.”

Some Twitter users were quick to credit Trucco for the SpongeBob Super Bowl tribute. “@anthonytrucco thank you for making that possible #HalftimeShow” user @_DaSilvaSandra tweeted.

Big shoutout to @anthonytrucco for the true halftime performance. You’re the real MVP

User @dragonflyjonez also wondered, “But did the person who made that Spongebob/’Sicko Mode’ mashup get paid? I’m sure they had to pay Spongebob creators/Nickelodeon whoever. I’d be sick if something I created made it to the Super Bowl and I didn’t see a dime from it.”

But did the person who made that Spongebob/Sicko Mode mashup get paid? I'm sure they had to pay Spongebob creators/Nickelodeon whoever. I'd be sick if something I created made it to the Super Bowl and I didn't see a dime from it

User @abzpry thinks Trucco should at least have been mentioned in the CBS Sports report we called attention to above:

I mean come on they could have at least mentioned it here AT LEAST pic.twitter.com/ZAMG6UeeCt

User @dracofrm29 likewise noted they weren’t exactly the same clips but that “yours was better.”

However, not everyone thinks Trucco should get compensated for the idea. “You expect to get paid for Two things that aren’t yours ? Yikes man,” @bradlitt22 tweeted Trucco. “You took the work of others and now want to get paid for other people doing the same thing lol,” @MasonTSchweizer pointed out.

You expect to get paid for Two things that aren’t yours ? Yikes man.

Trucco is on the wrong side of conversations on intellectual property rights, as user @reminiss was quick to mention:

ALL the performers don’t even get paid for performing. What do you expect to get considering neither of the IP belongs to you on top of that?

In response to users’ tweets that he shouldn’t be given credit for the idea, Trucco told the Daily Dot that he’s not really after any form of compensation or “legal credit.”

“I am not seeking legal credit or reparations for the use of my creation. … It wouldn’t have taken a lot of work for one of the parties that I mentioned [in my tweet] to acknowledge the inspiration for the Super Bowl set. I want to make it very clear that I am in no way upset or angry at anyone. … I hope that the NFL and associates will do the right thing and reach out…”

While he knows he doesn’t own the rights to SpongeBob or “Sicko Mode,” he maintains he deserves credit for the original mashup: “One thing I can say with 100% certainty is that those two creations would have never existed together at today’s halftime show had I not brought the two together in my mash up video.”

NFL, @NFLonCBS, @nflnetwork, and CBS Sports—who were mentioned in Trucco’s tweet—have yet to respond to our requests for comment. We’ll update this post if they do.

It would be hard to confirm if Trucco can claim to have been the first one to have a SpongeBob-“Sicko Mode” mashup idea. He certainly made it popular on Twitter, but outside of the platform, who knows? Still, we can’t help but ponder the same thing as @iamcam35, who tweeted, “I can’t imagine how many ideas that [began] on Twitter went on to make someone else money in real life.”