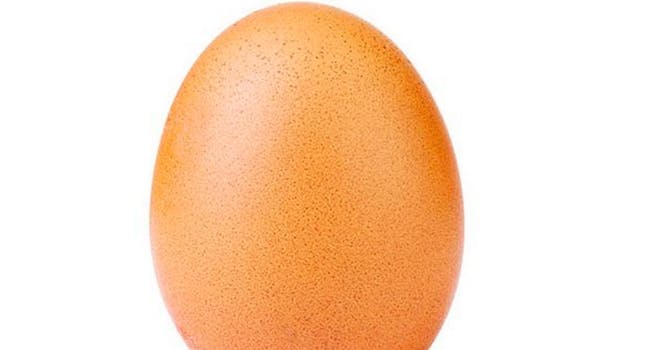 In a strange, but rather wholesome, turn of events, a photo of an egg is vying for the most-liked Instagram photo of all time—and it just might win.

The phenomenon, first reported by BuzzFeed, reached a fever pitch on Sunday evening.

“Let’s set a world record together and get the most liked post on Instagram. Beating the current world record held by Kylie Jenner (18 million)! We got this,” the caption on @world_record_egg’s photo says, followed by the high-five emoji and the hashtags #LikeTheEgg, #EggSoldiers, and #EggGang.

The photo of a standard-issue, brown hen’s egg has tough competition—it’s trying to topple Kylie Jenner’s photo of her daughter, Stormi Webster, in which she revealed the child’s name. Jenner’s photo, from February 2018, currently has 18.1 million likes.

But since it was posted on Jan. 4, @world_record_egg has garnered over 17 million likes, closing in on Jenner’s record.

Of course, some are trying to capitalize on the egg’s success. And there are copycat accounts, too.

@theworldrecord nut asks, “Kylie Jenner did it, Beyoncé did it, even an egg did it… Can deez nuts get a world record?”

Users are commenting on Jenner’s February photo, some simply tagging @world_record_egg, or leaving a series of egg emoji.

It’s unclear who is behind the account, and what happens if, or after, the photo reaches the 18 million mark.

As Teen Vogue points out, if the egg does break Jenner’s record, it likely won’t hold the throne for long; the Kardashian-Jenner clan has a vise-like grip on social media frenzy.

The Daily Dot reached out to @world_record_egg and to Instagram for comment but did not receive a response from either by press time.