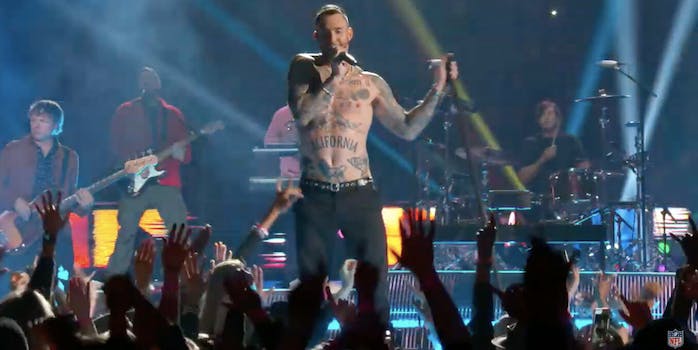 Adam Levine’s mostly dull half-time performance at the Super Bowl has led to innumerable Maroon 5 memes. But it has also sparked a conversation about the hypocrisy of the lead singer ripping off his shirt and bearing his nipples, while a similar act almost cost Janet Jackson her career 15 years ago.

After Levine proudly took his tank off, people had all sorts of opinions about his torso because, really, who passes up an opportunity to comment on tattoos like this:

Adam Levine looks like he bought 12 packs of fake sailor tattoos from a liquidation sale. pic.twitter.com/71NF9OfPp6

Adam Levine is tattooed like he's the main character in Memento but the mystery is where he left his Juul. pic.twitter.com/FxBAxOPnsG

But mostly, fans are pissed Levine’s strip-down was cheered and celebrated, whereas when Jackson’s right breast popped out in the middle of a performance with Justin Timberlake at the 2004 Super Bowl, she suffered severe consequences in the aftermath.

Following the incident, CBS, MTV, and Jackson herself were charged $550,000, and CBS chief executive Les Moonves had Jackson’s music banned on numerous platforms. In fact, Moonves intentionally tried to harm her career, as a Huffington Post report suggests, which affected the sales and promotion of the album she released a month later and her marketability moving forward. Meanwhile, Moonves was allegedly engaged in sexually harassing and assaulting women on the job, and also stymying other women’s careers, and he stepped down from CBS last year.

The discrepancy—of the world’s reaction to Jackson possibly inadvertently exposing her breast (via Timberlake) versus Levine wilfully taking off his entire shirt—angered many.

WHY CAN ADAM SHOW HIS NIPS BUT JANET CANT #superbowl

Wait a damn minute!! Janet Jackson show's a tiny bit of nipple, and all hell breaks loose. He takes off his shirt and nothing?!! What??!!!! I'm outraged! #SuperBowl #PepsiHalftime

The incident also coincided with the second annual #JanetJacksonAppreciationDay, which reportedly began last year after Timberlake was asked to headline the Super Bowl Half-Time show, another form of hypocrisy and, honestly, another bland performance.