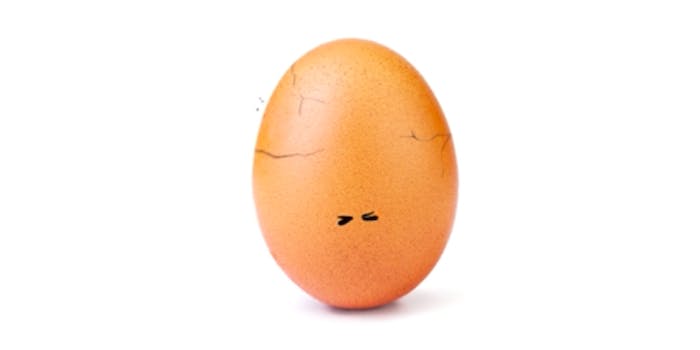 Last month, an egg became the most-liked photo on Instagram ever—in just nine days, to boot. The egg has over 52 million likes, surpassing the 18 million likes on Kylie Jenner’s photo of her daughter, Stormi Webster, in which she revealed the child’s name.

The egg made its debut outside of Instagram after the Super Bowl to talk about mental health in a video released by Hulu.

“Recently, I’ve started to crack,” the egg says in the commercial as it cracks completely. “The pressure of social media is getting to me. If you’re struggling too, talk to someone.”

The video ends by directing viewers to the nonprofit Mental Health America.

The creators of the egg’s account, named Eugene, told the New York Times that mental health is the first of several causes that the egg will stand for.

“People have fallen in love with this egg, and Eugene the egg wants to continue to spread positive messages,” Alissa Khan-Whelan, one of the people working on the egg’s social media accounts said.

Most on social media applauded the wholesome video and the campaign to spread mental health awareness.

The World Record Egg episode on @hulu is a minute long of a great message. Highly recommend watching it. Props to Hulu and this egg.

The egg has only been around for about a month and already has set a world record and starred in a Super Bowl ad. I can’t wait to see what it does next.