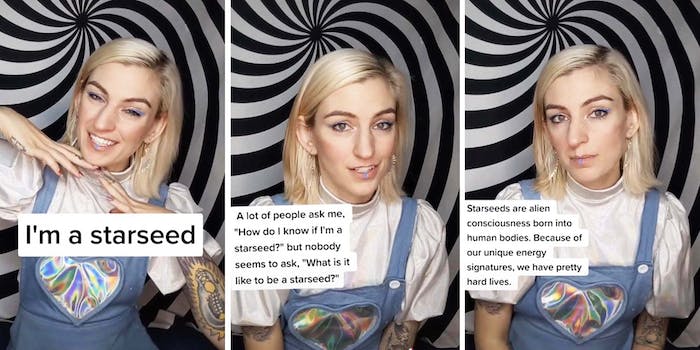 A TikToker claiming to be a repressed ‘alien consciousness’ goes viral

'Being a starseed is a super lonely experience,' explains the cult leader who claims to be part alien.

New age is back in a big way, if you haven’t noticed. Crystals, tarot cards, and astrology have once again come into vogue over the past several years—typically among white millennial women who are perhaps drawn to the feminist aspects of the counterculture. And though some people might still think those things are a bit “out there,” it’s really just the tip of the new age iceberg. As such, allow us to introduce you to the concept of “starseed.”

Starseeds, also known as “star people” or “indigo children” are a Native American spiritual concept that gained widespread attention after being introduced in the 1976 book Gods of Aquarius by Brad Steiger.

The book supposedly makes the argument that “certain people originated as extraterrestrials and arrived on Earth through birth or as a walk-in to an existing human body.” Rare, unused copies evidently go for literally hundreds of dollars online.

A woman who goes by “Unicole Unicron” claims to be one such starseed. Her TikTok is full of informative videos for those who think they may too be starseeds, or anyone else just interested in dabbling their toes in alien reincarnation. One of Unicole’s videos, which explains what it’s like to be a starseed, recently made its way to Twitter where it has received no shortage of mockery and ridicule.

As Unicole explains in the video, being a starseed can actually be quite the lonely life.

“Starseeds are alien consciousnesses born into human bodies. Because of our unique energy signatures, we have pretty hard lives,” she explains. “Being a starseed is a super lonely experience. It feels like nobody understands you and it feels like your family is far away in space.”

She continued to say that because of this “super different energy signature,” starseeds are often diagnosed with “severe mental illness” because of their “ability to go about life like nothing is wrong,” and can “see the corruption in place very clearly.”

The positives, she adds, are that starseeds are “usually super smart and also really psychic,” before pivoting to an obligatory: “starseed cult, ask me how.”

In fact, Unicole, a self-proclaimed “pop star cult leader” is also the founder of UNICULT, which was profiled in a 2016 Vice piece titled “I Was Brainwashed by a Feminist Digital Cult Leader.” (The digital media company later produced a short documentary on the subject in 2019.)

Though both pieces were generally open-minded, the rest of the internet is, shall we say, having a more difficult time getting on board with the concept of alien consciousnesses born into human bodies.

“The lengths to which white people will go to feel oppressed is honestly impressive,” wrote one Twitter user in a tweet containing the video that received more than 1.2 million views before it was removed.

“White people are even appropriating Martian culture,” added another user. “@POTUS did you ban TikTok yet?” quipped yet another, poking fun at President Trump’s apparent war with the platform.

We’d also accept “What in the caucasity?”

It should also be noted that despite its obvious similarities, UNICULT is in no way associated with another famous cult created by a science fiction author which is also based around ancient alien spirits. It is, however, no less deserving of ridicule, apparently.