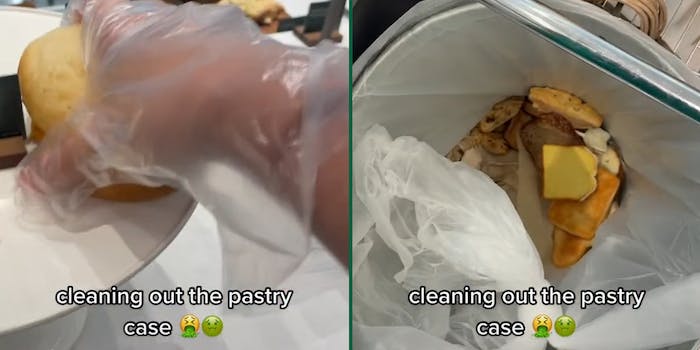 Starbucks worker reveals what happens to food in the pastry case

'This is why I get so confused when customers want us to give them food out of the pastry case.'

A viral TikTok video shows a Starbucks worker revealing what happens to pastries and sandwiches in the food case.

Filmed and posted by Kayla (@sussyp1x13) in late June, the video has over 470,000 views. “This is why I get so confused when customers want us to give them food out of the pastry case #barista #baristaproblems #starbucks,” she wrote in the caption.

Kayla filmed her taking various sandwiches and pastries out of the food case and throwing them directly into the trash. The overlay reads, “cleaning out the pastry case,” with vomiting and nausea emoji.

However, the voiceover says it smells “sour,” suggesting that the food likely stays in the casing for a while. A surprising number of people wondered if the items in the food case were even real, as one comment said: “Always thought they were props n the real ones were in the fridge.”

Another wrote, “It’s real????????? I thought it was plastic.” A third wrote, “I thought those were plastic replicas.”

Kayla responded to another question on whether the food was real, saying, “YESSS we cook it every morning to put it in the case all day lmfaoaoao, when I take it out, it’s disgusting.”

Numerous people asked why Starbucks had not invested in plastic replicas, given the amount of food it would be wasting every day. Technically, it’s likely covered in overhead given they show and encourage customers to buy.

Here’s a telling passage from a Mashed article: One of the other intentional things Starbucks does is light up the food case. In fact, the area with the sandwiches and pastries is typically going to be the best-lit spot in the whole store—and it’s not to make it more aesthetically pleasing. Starbucks wants to draw your eye to the display so that you’re more tempted to splurge on that coffee cake you love so much.

The Daily Dot has reached out to @sussyp1x13.