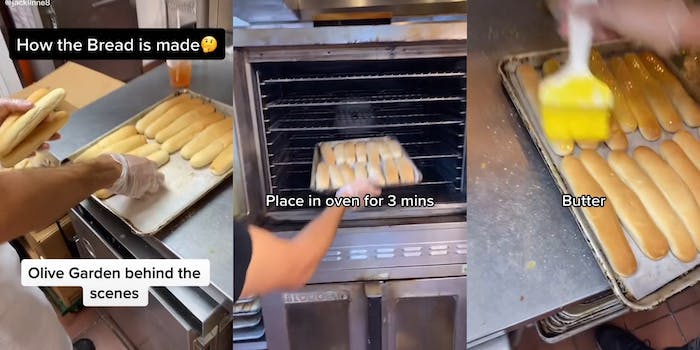 Olive Garden worker reveals how breadsticks are made in viral TikTok

'Not as bad as I anticipated.'

A viral TikTok video shows an apparent Olive Garden employee revealing how the chain’s delicious breadsticks are made, and honestly, there doesn’t seem to be much to it.

Posted by @jacklinne8 on July 7, the video has over 4.2 million views. The worker also promises more Olive Garden behind-the-scenes content in the future with the video’s caption: “More bts coming soon.”

On the text overlay, the worker writes, “How bread is made.” The process seems pretty straightforward.

The worker shows the already cooked breadsticks going on a tray that goes into a heating drawer. The sticks are then placed in the oven for three minutes. Then the bread is met with liberal slatherings of butter and garlic salt.

Of course, some steps aren’t shown, like if the dough gets made or where the breadsticks come from. And many online have already figured out copycat recipes for the delicacy.

Nevertheless, viewers are delighted an Olive Garden worker took them behind the scenes to show them how the staple item gets prepared. “Not as bad as I anticipated,” one said, with another calling the breadsticks their “fav thing” at the restaurant.

Olive Garden has been serving unlimited breadsticks since the first location’s opening in Orlando in 1982. The appetizer is reportedly based on filone, an Italian baguette-like bread.

According to Thrillist, “the Italian-American chain serves over 529 million breadsticks a year, which works out to around 1.6 breadsticks for every US resident. And while Starboard Value, an activist hedge fund that once controlled Olive Garden’s parent company, tried to curtail the unlimited breadstick policy in 2014, calling it wasteful, the chain refused to give in.”

It’s a good thing it held on, because the breadsticks are, by far, one of the most attractive features of the restaurant.

The Daily Dot has reached out to @jacklinne8.