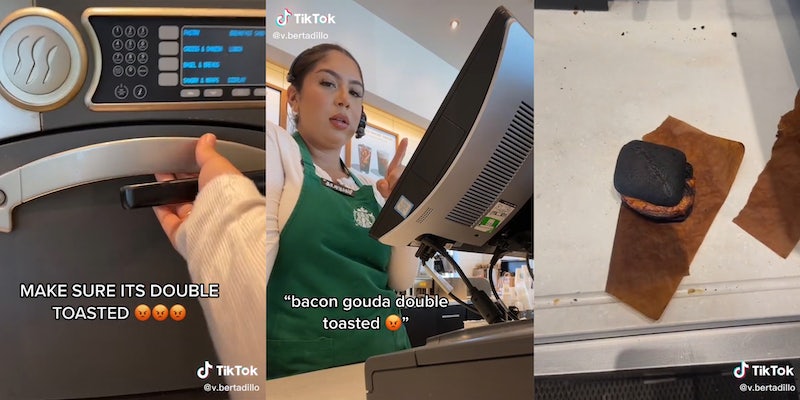 ‘I really hope you gave it to that person like that’: Starbucks worker roasts customer’s ‘double-toasted’ sandwich order

'MAKE SURE ITS DOUBLE TOASTED.'

There’s nothing wrong with ordering a Starbucks sandwich double-toasted… right?

A Starbucks TikTok about a burnt sandwich is taking off this week—but unless you’re a Starbucks insider, it may be a little confusing. Posted by TikToker @v.bertadillo, the TikTok shows a barista putting a bacon gouda sandwich in the toaster oven, captioned “MAKE SURE ITS DOUBLE TOASTED” with three angry-face emoji. When she takes it out of the oven, it’s black and burnt to a crisp.

This TikTok is kind of making fun of the customer for demanding something double-toasted, but judging by the comments section, it’s also highlighting two recurring gripes about the Starbucks sandwich-toasting process.

First of all, the toaster oven sometimes burns things if you toast them twice—a common order from customers. But if you only toast sandwiches once, sometimes the inside is still raw or even frozen after toasting.

the double toasted in question 😕

“Omg i did that with a plain bagel the other day,” wrote one commenter. “it would’ve been ash if i didn’t take it out earlier too!!”

“I miss the old ovens sm,” remarked another, while a different reply joked, “i really hope you gave it to that person like that.”

The problem of undercooked Starbucks sandwiches came up a lot in the comment section, with Starbucks workers and customers complaining about receiving sandwiches with raw bacon or other frozen ingredients.

“No literally” wrote one. “With the cheese danish and butter croissant , I have to burn them cause it’s never enough.”

“NO THIS IS HOW I ORDER IT,” a Starbucks regular explained. “Whenever I get it normal it’s DISGUSTING the bacon is always raw I do it open faced too.”

Since this is a pretty inside-baseball TikTok for Starbucks aficionados, a lot of commenters had solutions to the problem. The most popular one was toasting sandwiches open-face, which helps the filling cook through without having to burn the outside with double-toasting.

“it cooks so much better like that,” @v.bertadillo agreed, replying to a commenter who suggested the open-face toasting idea. So if you’ve noticed this problem when ordering a toasted Starbucks sandwich, now you know what to do!

The Daily Dot has reached out to @v.bertadillo via TikTok comment.