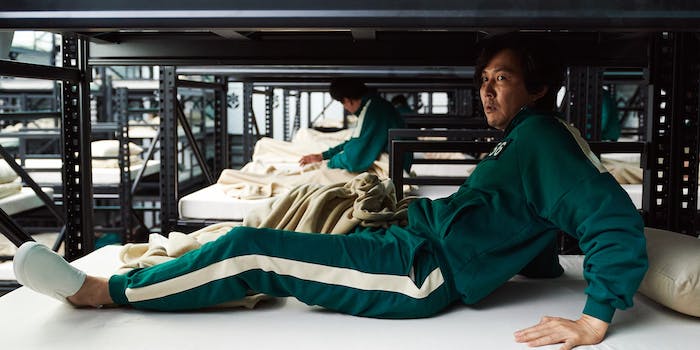 Did ‘Squid Game’ foreshadow its biggest twist in episode 1?

Some fans think that the 'red light, green light' game includes a clue regarding the twist in episode 9.

This post includes spoilers for episode 9 of Squid Game.

Netflix‘s Squid Game keeps your heart pounding to the very last moments of the finale, including a major twist after the games are over. A year after protagonist Seong Gi-hun (#456) emerges victorious (and extremely traumatized) from the competition, he’s reunited with Oh Il-nam (contestant #001)—a character we previously assumed was dead.

Seong Gi-hun and Oh Il-nam have one of the most compelling relationships in the show, with Gi-hun protecting the elderly Il-nam, who is suffering from a brain tumor. After neglecting his own ailing mother back home, Gi-hun takes serious risks to treat Il-nam with compassion and respect. He’s ultimately rewarded for his kindness, benefiting from Il-nam’s wisdom while other competitors saw the old man as a liability. However, their friendship comes to a violent end in episode six, when Gi-hun sacrifices Il-nam’s life to ensure his own survival.

This tragic subplot illustrates how the games force competitors to make horrifying choices. But in episode 9, Seong Gi-hun learns the shocking truth: Il-nam wasn’t a real competitor. He’s actually the game’s patron, a wealthy man who chose to participate in order to feel alive during his final years. And according to a viral fan theory, the show signposted Il-nam’s true role during the “red light, green light” game in episode 1. Supposedly the doll’s motion sensor didn’t scan Il-nam, meaning he wasn’t in any real danger.

Lots of people picked up on this detail independently, or had their eyes opened by TikToks like the one above. But while this theory is popular, it isn’t actually accurate. As other TikTokers have since pointed out, there’s still a faint green outline around Oh Il-nam’s body. Possibly it’s just less visible on certain screens. At any rate, if you rewatch the scene on Netflix (around the 48.30 minute mark in episode 1), you’ll see that he does indeed get scanned alongside his fellow competitors.

This fan theory/debunk cycle highlights something interesting about audience reactions to Squid Game. A lot of American TV shows encourage viewers to look out for Easter eggs or solve narrative puzzles. Alternatively, they try to stay ahead of fans trying to predict future plot twists, like Westworld‘s creators rewriting a storyline because fans guessed it on Reddit.

But Squid Game doesn’t function like that. It’s a thriller with lots of twists, cliffhangers, and intentional foreshadowing, but it’s not the kind of show that relies on puzzles or Easter eggs. While the Oh Il-nam twist is a genuine shock, a lot of Squid Game‘s big emotional beats are “predictable,” which isn’t actually a bad thing. We know these characters are being set up to kill each other; that’s the whole point of the games.

Emotionally speaking, you can guess that Gi-hun will sacrifice Il-nam because that’s the most devastating outcome. The games are engineered to torment the players (and the audience) as much as possible: first in terms of pure stress and violence, and later in terms of the characters’ relationships. An Easter egg in episode 1 wouldn’t make this story any more interesting.

Likewise, the fan theory that Oh Il-nam is secretly Seong Gi-hun’s father needlessly complicates their actual relationship. Il-nam encourages Gi-hun’s protective feelings during the first six episodes, planting the idea of himself as a vulnerable yet paternal figure. (For instance, he literally compares Gi-hun to his own son.) This makes Gi-hun’s eventual betrayal all the more satisfying for Il-nam, because Il-nam draws pleasure from manipulating him to breaking point. And in episode 1, the real “clue” pointing toward Il-nam’s secret is more ambiguous. We see him openly smiling and looking excited while playing “red light, green light,” something we initially interpret as a sign of senility—but in retrospect, we understand in a very different way.