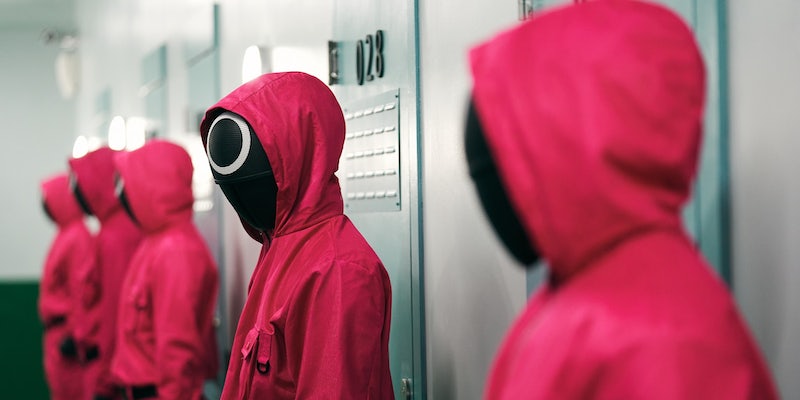 TikTokers are recreating the deadly games from Netflix’s ‘Squid Game’

The Korean Netflix show Squid Game is all over TikTok right now, for reasons that are very easy to understand. Set in contemporary Korea, the show is a cliffhanger-filled survival thriller that combines cool imagery with gory violence and anti-capitalist commentary. It involves a deadly contest where 456 strangers are recruited to play simple children’s games. The eventual winner will get a massive cash prize, while everyone else will probably die.

Fans on TikTok inevitably started experimenting with their own versions of Squid Game‘s contests—ironically a less dangerous idea than some other TikTok crazes. The tasks are based on traditional Korean playground games, some of which are familiar to Western viewers, while others are primarily Korean. “Red light, green light” (also known as “statues” or “grandma’s footsteps”) is really taking off, with one group of fans hosting an amazing IRL game with costumes and armed “guards”:

“Red light green light” appears in episode 1 and features heavily in the trailer, so it’s an obvious low-spoiler option for people who haven’t watched much of the show yet. Plus, there’s the doll.

In episode 1, the contestants have to run toward a target without being spotted by a giant doll-girl. If her sensors notice someone moving, they get shot. She’s already one of the most memorable images in the show, and there are at least two real-life versions of her in the wild: The original statue came from a Korean theme park, and Netflix put a promotional version in a mall in the Philippines, inviting fans to play. (Netflix, incidentally, is clearly pouring a lot of money into promoting this show.)

The “red light, green light” girl has also shown up in Roblox:

TikTok’s other big Squid Game challenge relates to the game in episode 3, so stop reading now if you’re avoiding spoilers!

In this episode, the contestants play a game with traditional Korean honeycomb candy (dalgona), which is made by melting sugar and baking soda into a thin, crispy disk. A simple design is pressed into the disk, and the challenge is to snap the shape out of the surrounding candy without breaking it. People gamble small amounts of money on this game, while also getting a tasty snack. In Squid Game, the odds are much more lethal. And since the candy is easy to make at home, this was another popular choice on TikTok.

Squid Game came out just under two weeks ago, but it took a while to spread by word of mouth among English-language audiences. So as more overseas fans reached the show’s final episodes, we’re sure to see more TikToks covering the later games in the series. “Red light, green light” is probably going to keep its place as the show’s most iconic contest, however.