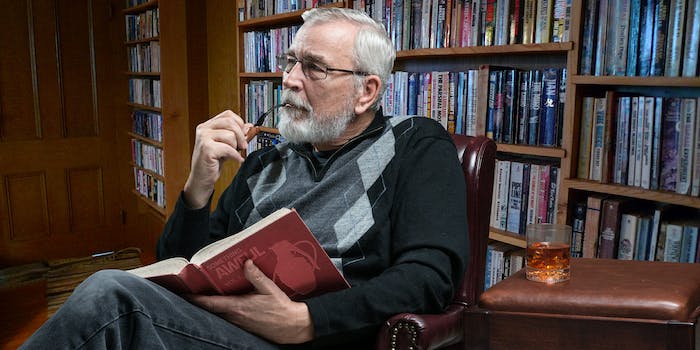 How Something Awful taught the internet how to laugh at itself

This is who to thank/blame.

That’s what Richard Kyanka told me when I asked him about the influence of Something Awful, one of the single most important websites in the history of internet humor.

Still, SA’s influence can’t be overstated. It started in 1999—before Twitter, before YouTube, before Facebook, before MySpace. It was right around the time when, for the first time ever, the number of people using the internet in the United States would reach over 50% of the total population.

At the time Kyanka, best known by his screen name “Lowtax,” was working at PlanetQuake, a website devoted to the phenomenally popular game Quake, one of the first online 3D multiplayer action games. In fact, when I asked him if there was anything I should make sure to include in this article, the only thing he mentioned was that he was really good with the off-hand grappling hook, in the Lithium mod for Quake 2, with Runes enabled. If you, like me, have no clue what he’s talking about it, you can get a better sense by checking out the site devoted to that particular game modification, although if you don’t feel you have the time, I believe he was making a joke.

Kyanka had already begun working on his own site before being fired from PlanetQuake (for creating a sarcastic post making fun of one of his coworkers). The site he started was Something Awful, and 13 years later Gizmodo would say that it was “indirectly responsible for almost everything amusing on the internet.”

The site was a collection of front page articles written by Kyanka and a small group of friends, as well as various forums where members could create content and have discussions. The first few years were rocky. This was right as the Dot-com bubble was starting to burst, and companies like eFront, and GameFan, who were hemorrhaging money, never ended up never paying for their ads on SA, even though the site was quickly gaining popularity.

In order to keep SA afloat, Kyanka started charging a one-time fee to become a member and post to the forums. This not only generated much-needed revenue, but meant that the people creating posts cared about the quality of their contributions… at least enough to invest 10 bucks.

SA members (self-described “Forum Goons”) started pumping out hilarious content on a daily basis. The best of these were gathered up and presented on the front page of the site under the heading “Comedy Goldmine.”  True, mocking popular culture has been around since there was culture to mock, but the SA Forum Goons were the architects of how it would be done online. For instance, there was a feature called Photoshop Phriday, where users picked a new topic every week, and digitally manipulated photos to create new satirical images. It’s a practice that has since become so common it’s hard to imagine the internet without it.

SA is also responsible for the creation of things like the Slender Man urban legend, which began by being spread through Something Awful forums. In June of 2009, a user named Victor Surge (real name Eric Knudsen), created the character for a “Paranormal Pictures” Photoshop contest. The idea was to use Photoshop to create realistic spooky images by digitally manipulating actual photographs. The images were then posted to various paranormal websites where they were passed off as authentic.

“One of two recovered photographs from the Stirling City Library blaze. Notable for being taken the day which fourteen children vanished and for what is referred to as ‘The Slender Man,'” he wrote.

The plan worked better than Knudsen could have imagined, making it’s way rapidly from inside joke to monumental urban legend status. Slenderman can now be found everywhere online, from Deviant Art to YouTube. Sony is even filming a Slenderman movie that will be released sometime next year.

Infamously, in May of 2014, two classmates stabbed another 19 times, and said it was to appease Slender Man. Kyanka told me, to this day, the fictional character is still the number one thing he gets asked about.

Slenderman aside, comedy is what SA was known for, and pretty much everything funny can be traced, either directly or indirectly, back to the site. “All Your Base Are Belong to Us,” one of the earliest internet memes and often considered the most popular meme ever, was an SA creation. The desire of the site’s users to constantly impress one another led Jeffrey Ray Roberts to make the now infamous video of the catchphrase, which was percolating in the SA forums.

“I did it for the sheer inside-joke value,” he told Time years ago. “Everyone was trying to one-up each other.”

The infamous video ripped photoshops from the site’s “All Your Base” thread, and became viral gold.

Chuck Norris Facts started there. After user Ian Spector struck success with a random Vin Diesel facts post, he polled the site to find a replacement. The users all wrote in Chuck Norris. The rest is history.

#ChuckNorrisFact When Chuck Norris does a pushup, he isn't lifting himself up, he's pushing the Earth down.

#chucknorrisfacts Chuck Norris lost his virginity before his dad.

Chuck Norris was dropped twice as a baby. First on Hiroshima, then on Nagasaki. #ChuckNorrisFacts

More recently Fox picked up “Golan the Insatiable” for a second season, a cartoon based on characters created in the Something Awful forums.

It was also a Forum Goon who would go on to start 4chan, one of the most influential imageboard sites on the web, which, in turn, gave rise to Anonymous.

If you’ve ever been on Weird Twitter, SA was where those users sharpened their wit. It’s also the only thing I got Kyanka to take at least partial credit for.

“A lot of those people started on our forums,” he said.

“It was just layer upon layer of irony. Yeah, a lot of people on Twitter got their voices in FYAD but FYAD isn’t like Twitter at all. It’s basically just all inside jokes that you could only get if you were around for a long time or have way too much time on your hands. Slowly everyone funny moved onto Twitter and I don’t think anyone really posts in FYAD anymore.”

Even given SA’s long history, and list of contributions, Kyanka is still reluctant to give it too much credit for anything we see online today. Given, with all the myriad of humor-based sites and content available, it’s impossible to untangle what influenced who and at what time, but it’s also hard to not see connections when things like a Rate My Professor page for Ross from Friends, pops up,  or when a group called “Everything is Terrible” re-edits a 90’s video called “Cat Massage.” The truth is, Something Awful is so tightly woven into the fabric of internet culture that its importance can be neither underestimated nor completely understood.

Partially, SA was just in the right place at the right time. It went live just as the majority of Americans began to use the internet, but before there was so much content that any given website would become lost in the noise.  In the year 2000, there were roughly 17 million websites online. Today there are over a billion. Suddenly, along came a site that was not only funny but compiled everything funny in one place. Most of the humorous content was being created there, and if it wasn’t, you could bet that one of the forum goons would find it before you, and link to it.

This was also before the rise of social media. Even Friendster, often considered the “godfather” of social media, was three years down the road. Your friends weren’t constantly posting funny video and pictures for you. If you were online and wanted to laugh, you went to Something Awful. Period. They stepped into a massive void and filled it perfectly. Just as the Tonight Show became the template for late night talk shows when it debuted in 1954, SA became the architect of how humor would be handled online, because no one else was doing it, and they did it so very very well. The next time you laugh at Stephen Colbert’s opening monologue, you can think Steve Allen for creating the concept. The next time you laugh at a meme, any meme, you can thank Something Awful, who might not have coined the term, but gave us the meme as we know it today. It’s a word most of us would never have heard without them. There had never been a site like SA and, for that matter, there never will again. There can’t be. Not only because it was unique, but because it appeared at a unique time in history. The internet was hungry for laughter and SA offered not only a meal, but an all-you-can-eat buffet.

Of course, nowadays there are plenty of humor sites. Funny or Die (which, yes, sounds suspiciously like Fuck You and Die) also features original content by in-house staff as well as content created by member users. Much of the site’s content is very good. Who after-all, doesn’t want to see Zach Galifianakis talk to Barack Obama about pardoning turkeys?

But as funny as the site might be, they, like everyone else, are still building on the foundation laid by Something Awful.

Nowadays, Kyanka spends most of his time either with his family or watching old Lifetime movies, which he claims are funnier than anything currently available online (to be fair, he might have a point). He also occasionally reviews horrible video games on YouTube, but other than that, and doing some coding for SA, he doesn’t spend much time online.

As far as SA itself is concerned, it’s still alive and kicking and snarky as ever. The articles tend to be either sarcastic send-ups of popular culture, or just downright bizarre. Zach Parsons, one of the original team, is even still around and writing new content.

When you first start looking through the site something may seem off, or at least different, and it might take you awhile to realize what it is. I’ll save you the time. It’s words. So many words. The word to picture ratio is so far off from what the rest of the internet has become that it’s almost disconcerting at first.

But maybe that’s because Something Awful still might have something to say.