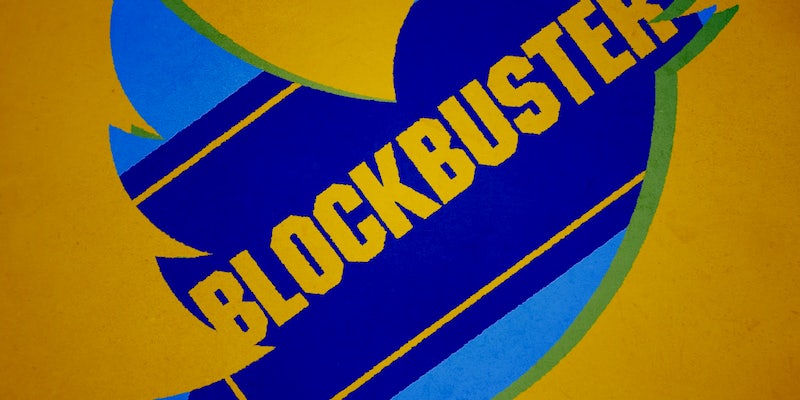 You thought they were all gone. You were wrong.

Perhaps you thought the last Blockbuster stores closed a few years ago. Sure, we all did. There were certainly a lot of news stories about it. In fact, according to Blockbuster, the last store closed in January of 2014.

Underdogs never came back from the dead? I guess You've never heard of Jesus.

That’s right: There’s one lonely Blockbuster store left, and from the sound of things, it’s pretty desperate over there.

Due to financial strain, we will no longer be purchasing any new additions of the Air Bud series.

Listen, if you rent 3 movies you can take as many Sour Straws as you want.

If we have to rewind one more returned movie for a customer we're going to lose our fucking minds.

Where are they located, you might ask? Well, you’re not the only one to wonder.

@tiiinkkk In the Oak Park Shopping Center between Ace Hardware and the former O'Kelly Dojo.

That clears that up.

The Daily Dot assembled a crack team of experienced investigators to find out what was going on. Their conclusion? We should just email them and ask what’s going on. So that’s what we did

What’s your name, and what do you do at the store?

This account is actually run by a few of us at the store. We’re a small operation, so we take turns running social media, working the registers, and cleaning out the return drop box. A lot of people seem to think it’s a trash receptacle even though we taped up a sign that says it’s for movies and games only.

It’s no secret we haven’t been doing so well in recent years (one remaining store). Since the advent of the Internet, streaming services have taken a sizeable portion of our customer base. But instead of lying down, we dug into research and found the problem wasn’t the Internet, it was that we lost touch with our consumers. This account was created to get face-to-face with them and build a personal relationship for a better Blockbuster future. And to contact people who owe us late fees.

What’s it like working at the last Blockbuster in the United States?

It feels special to be the last remaining store of a such a culturally important franchise. But sometimes it feels like we’re the only ones who give a shit about watching films the way they were meant to be watched: on pieces of round plastic, slid into a machine that connects to your home television set.

Do you find more people come in for VHS tapes or DVDs?

It’s pretty much a 50/50 split on that one. If we’re being honest, though, most people come in to use our bathroom or hang out with Chad, a senior on the football team who works Tuesdays and Thursday nights.

Do you think Blockbuster, as a company, will ever make a comeback? If so, what form do you think that might take?

Honestly, I think the odds of a comeback are pretty high, because we’re getting back to our roots. Right now we only have one store, and we won’t open a second until we have at least 10 grand in the bank.

If you were suddenly in charge of the company, what is the first thing you’d do?

I’m glad you asked. Three things: 1) Modernize our film library. 2) Upgrade our selection of energy drinks for the youth. 3) Get rid of the asbestos.

Why should people come into your store, instead of, say, watching something on Netflix or Amazon?

At Blockbuster you get personal recommendations from serious movie buffs like Colleen and Debra. How many times have you struggled to figure out what to watch on Netflix? All the time, I bet. Here, we always ask the right questions to help you pick out the perfect action flick, family comedy, or softcore adult film for your movie night.

What’s your favorite thing about working at Blockbuster?

Like any job, I really like the consistent money. My dog has been limping around lately, and I might have pay for surgery. Other than that, it’s always gratifying to hear from customers that you made their sleepover by recommending the right Zac Efron movie.

Because of the tree cover, teens seem to think our parking lot is a great place to park their cars and hook up with each other. My manager always makes me go out there with a broom.

We’re as dedicated as ever to providing high-quality VHS, DVD, and Blu-Ray selections at reasonable blue collar prices. We’re here today. We’ll be here tomorrow. And as long as our delivery driver wins his court case, we’ll be here next year.