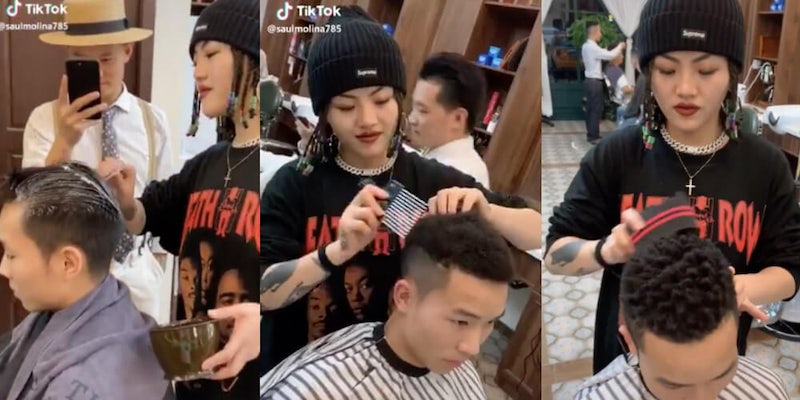 Hippie Buddha, a Korean hairstylist and salon owner, is turning quite a few heads on social media by giving his clients (who are all also Korean) Black hairstyles. Needless to say, Twitter is not happy about it.

Buddha’s Instagram, which says he is an African American hairstylist, is littered with images of his finished looks that range from dreadlocks and box braids to full afros. It also features urban wear and traditional African make-up.

“This is dread extensions,” he boasts in one of his Instagram videos, while a stylist in the salon adds faux locs to a client’s hair. In another, he excitedly announces that the salon is working on another “afro perm.” His videos, which are usually edited to rap music, give his followers an inside look at how he changes “1c hair” to “4c curls.”

Buddha’s hairdressers have even styled children, adding pictures of their coiffed ‘dos to his Instagram page.

A video featuring one of Buddha’s stylists, known by her TikTok user name @saulmolina785, sparked outrage after someone on Twitter posted a short clip of her not only rocking braids and urban wear, but also giving her clients hairstyles traditionally worn by Black people. In it, she uses a sponge to style to what appears to be a recently permed ‘fro. It should be noted that similar to Buddha’s other videos, hers was also set to trap music.

The tweet quickly went viral, with many calling out the salon for cultural appropriation.

“This shit really ain’t it,” Twitter user @nopersonas wrote, along with an image that read, “I don’t really have a reaction image to summarize my disgust, but Jesus Christ, dude.”

this shit really ain’t it pic.twitter.com/sT3WcqrhI5