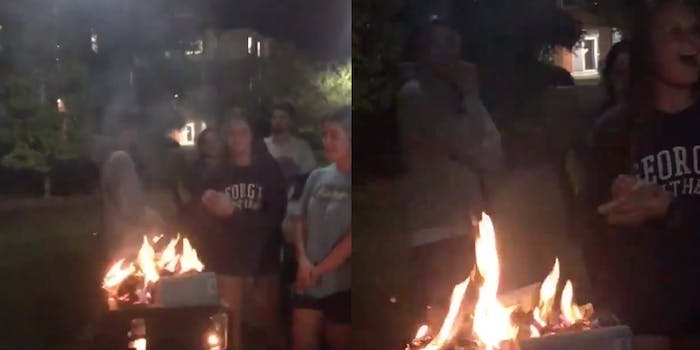 Social media videos show students at a Georgia college burning copies of a book written by a Cuban American author.

Jennine Capó Crucet spoke about white privilege and diversity while discussing her book, Make Your Home Among Strangers, which was assigned reading for some students at Georgia Southern University, where she was visiting on Oct. 9. The book itself is about a student of color navigating life at a predominately white university.

She later said she was questioned by a white student about whether she “had the authority to address issues of race and white privilege on campus” in the Q&A portion of her discussion. One student filmed what is the presumed ending of the interaction.

Can we talk about the ignorant student who fueled this to begin with? pic.twitter.com/Me2rqi3cWb

“I came here because I was invited and I talked about white privilege because it’s a real thing that you are actually benefiting from right now in even asking this question,” Capó Crucet responded to one student, according to the George-Anne.

Capó Crucet said she had given the same discussion on other campuses such as Stanford University and Albion College. “Nothing close to the events at GSU has occurred during any of my previous campus visits,” she wrote in a statement posted to Twitter on Friday.

Capó Crucet says “students began shouting back and forth at each other in the auditorium.” CNN reports that some of the students against Capó Crucet were shouting “Trump 2020,” while others were defending the author.

Capó Crucet says her campus hosts moved her from the hotel she was going to stay at to another one in a different town because an alleged crowd had formed outside her original hotel, and students were burning copies of her novel on campus.

According to a video shared by Twitter user @elainaaan, students are seen gathering around a grill, burning copies of the book, and laughing.

so after our FYE book’s author came to my school to talk about it… these people decide to burn her book because “it’s bad and that race is bad to talk about”. white people need to realize that they are the problem and that their privilege is toxic. author is a woman of color. pic.twitter.com/HiX4lGT7Ci

The tweet thread is just as contentious as the event seemed to be.

“The only reason anyone showed up is because it was required and after the racist bigotry you displayed against the white race we should all be compensated for your book,” Jakob Gross tweeted. “I’m all for equality but not for hate which is what you displayed.”

The only reason anyone showed up is because it was required and after the racist bigotry you displayed against the white race we should all be compensated for your book. I’m all for equality but not for hate which is what you displayed

Others shared their support for Capó Crucet, her message, and her book.

“Race is bad to talk about?! This country was built on racism. They need to understand that throwing racial issues under the rug or BURNING THEM will not change anything but make them look stupid. Pure ignorance. So ashamed to say I go to school with them,” Twitter user  @KelRenee_ wrote.

Many are now expressing that they are going to buy the book.

“That must be a damn good book because it has white folks shook! The last book that made folks feel like that was bell hooks ‘killing rage’…..no I have no choice but to buy the book because this promotional is phenomenal!” another wrote.

That must be a damn good book because it has white folks shook! 😂😂😂 the last book that made folks feel like that was bell hooks "killing rage"…..no I have no choice but to buy the book because this promotional is phenomenal!

I had not heard of your novel, but this act has caused me to seek it out, buy, and read it.

Should've done this a while back, but went and got a copy of your book from my local indie where we talked about all of this. I'd encourage others to do the same. So sorry this happened.

Seeing this story elsewhere inspired me to look up your book, and it looks interesting. I think I'm going to grab a copy.

In a statement released on Thursday, Russell Willerton, professor and chair of the Department of Writing and Linguistics at Georgia Southern University, said that “destructive and threatening acts do not reflect the values” of the college.

“Our department values stories and how they reflect parts of the human experience. We also value discussion and debate of important issues from all sides and perspectives,” Willerton wrote. “We regret that Crucet’s experience in Statesboro ended as it did. We call on students to remain civil in disagreement, even on difficult issues, and to make Georgia Southern University a place that we all can feel proud to represent.”

Update 1:29pm CT, Oct. 14: Contradicting a previous university department statement and Jennine Capó Crucet’s tweet explaining the incident, Georgia Southern University told the Daily Dot in a statement on Monday that “there was no report” to campus police “of anyone threatening [Crucet] or trying to harass her or visit her at her hotel.”

“We contacted the owner of the establishment where she was scheduled to stay on Wednesday night, and the owner confirmed there were never any unwanted visitors that evening,” university spokesperson Jennifer Wise said.