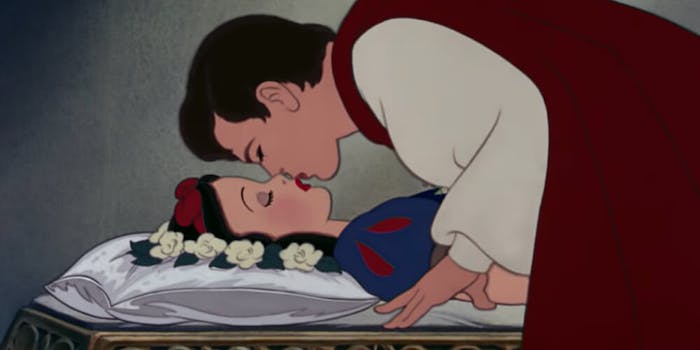 Someone needs to call the police STAT.

The age difference between two Love Actually stars isn’t the only shocking age gap to make its rounds on social media this week.

Every few years, the young ages of Disney princesses become a topic of distaste. This time, it’s about their ages in relation to that of their princes.

This forgotten fairytale facet has sparked a little bit of research and lots of head-scratching about age differences between Disney Princesses and their various princes.

Some have more reasonable–yet, still murky–age differences, such as Jasmine and Aladdin, who are 16 and 18 respectively.

The eight-year age gap between Rapunzel and Flynn Ryder in Tangled is enough to raise more than a few eyebrows.

One user argued that Snow White and Prince Florian’s age gap is “more disgusting” than Rapunzel and Flynn Ryder’s.

“Also rapunzel and eugene didn’t get married for years after they met,” they wrote.

There’s a lot to unpack here.

Then there’s possibly the largest apparent age gap: Milo and Kida from Atlantis. Several millennia are at play here.

Other users aren’t even concerned about the apparent pedophilia.

“He kissed a dead girl and that’s what you care about,” Twitter user @MuchaAleksandra wrote.

He kissed a dead girl and that's what you care about