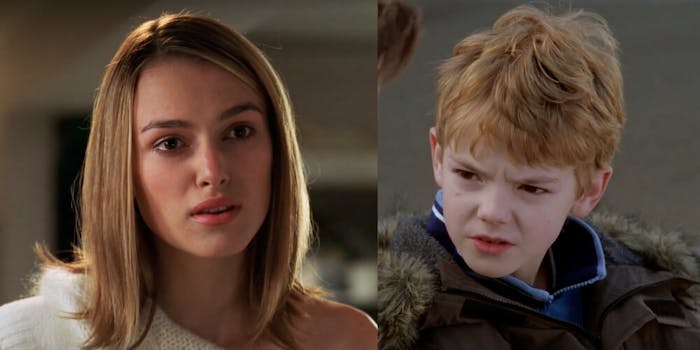 The age gap between 2 ‘Love Actually’ stars has people shook

A viral tweet revealing the unexpected age gap between actors Thomas Brodie-Sangster and Keira Knightley in the Christmas comedy Love Actually has many online baffled.

“Yearly reminder that there is only a five year age gap between Thomas Brodie-Sangster and Keira Knightley in Love Actually,” Twitter user @madelexne wrote, along with a photo of Knightley’s character Juliet and another of Brodie-Sangster’s character Sam.

Yearly reminder that there is only a five year age gap between Thomas Brodie-Sangster and Keira Knightley in Love Actually pic.twitter.com/ciC4v75ZPO

In the love-speckled holiday flick, Sam is a middle school kid who is trying to win the affection of his crush Joanna. Juliet gets caught up in a love triangle with her husband and his best friend. And they look like they belong in completely different age brackets.

Confusion and memes ensued, with many pointing out just how big of a difference five years can make.

“He looks 5 and she looks 25,” user @MaxJLHardy wrote in response to the Twitter reveal.

Another illustrated why the comparison is not a good representation of five-year age gaps.

Another pointed to Brodie-Sangster’s other roles to illustrate how he always seems to look much younger than his co-stars.

“Same age,” Twitter user @Deep_Cut_Films wrote. Deep_Cut_Films included a side-by-side of Hafþór Júlíus Björnsson and Brodie-Sangster. The two appeared in Game of Thrones together and look ages apart. Yet, there is only a two-year age difference between them. Brodie-Sangster is currently 29, and Björnsson is 31.