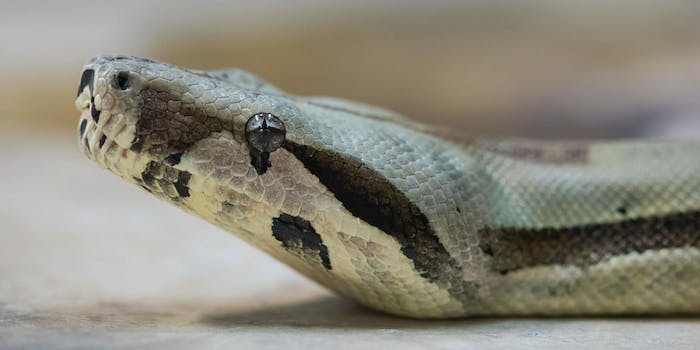 If you can't find your snake, it might be the Alameda County Sheriff's Office.

The Alameda County Sheriff’s Office in Oakland, California, is looking for the owner of a 5-foot boa constrictor left in a rental car at the airport.

“We are looking to return this [5-foot] Boa Constrictor to its rightful owner,” the department tweeted Wednesday. “You left your snake in your rental car at the Oakland Airport. Your snake is safe at our animal services. Please give us a call.”

The post includes a photo of an officer with the snake wrapped around his forearm.

We are looking to return this 5’ Boa Constrictor to its rightful owner. You left your snake in your rental car at the Oakland Airport. Your snake is safe at our animal services. Please give us a call. pic.twitter.com/TYTaH47N8T

So far, there are no reports of the owner stepping forward. But people on Twitter were happy to let the department know how they felt about the incident.

Poor snake. It’s a beauty – hope some responsible person steps forward to give it a good home! (Kudos to the Alameda Co. Sheriff’s Deputies for ensuring its safety!)

I would had a oh sh** moment if I had. Been next customer renting vehicle pic.twitter.com/FeV6gSLSIT

This is the prequel to snakes on the plane

You might be asking yourself, “Will this person be in trouble for leaving their snake in a car?” Given its length, the snake probably wasn’t a danger to most humans. As the name implies, boa constrictors kill their prey by squeezing it to death, and while it certainly could have bitten someone who startled it, it’s highly unlikely that it would have caused anyone serious injury (unless, of course, it gave them a heart attack).

As far as the snake’s welfare goes, that might be a different story. California law states:

… no person shall leave or confine an animal in any unattended motor vehicle under conditions that endanger the health or well-being of an animal due to heat, cold, lack of adequate ventilation, or lack of food or water, or other circumstances that could reasonably be expected to cause suffering, disability, or death to the animal.

It goes on to say that the first violation of this law “is punishable by a fine not exceeding $100 per animal.”

Local newspaper East Bay Times reports that the deputy who found the snake “happens to be a enthusiast about snakes,” so in this case, the sheriff’s department is likely just interested in reuniting the animal with its owner.

So if this is, in fact, your snake, it’s probably safe to go down to the department and pick it up. At the most, it will cost you $100, and at the least, you’ll walk away with a stern lecture about snake care.

Update 3pm, June  29: A spokesperson for the Alameda County Sheriff said that the owner of the snake has not yet come forward and that the pet would likely be adopted. “Nobody is in trouble,” the spokesperson said. “We don’t know how the snake got in there. Could be unintentional. Snakes are sneaky.”