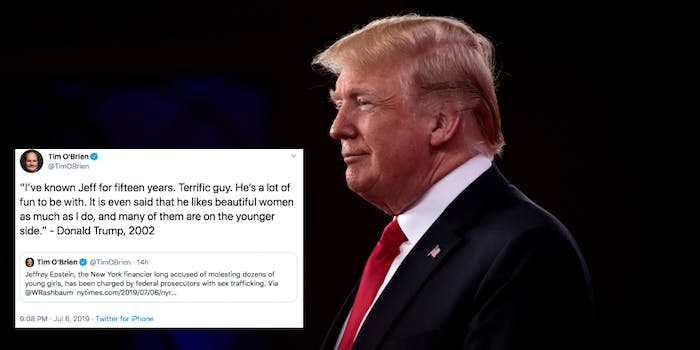 Their entanglement is an internet Rorschach test.

The arrest comes after a Florida court agreed to unseal records in a case around Epstein’s recruiting girls into his sex schemes, a lawsuit first brought by right-wing blogger Mike Cernovich.

While Epstein has long been accused of providing child prostitutes to the wealthy, it was only in recent months that reporting by the Miami Herald revealed the depth of Epstein’s crimes, and how he finagled a light sentence that granted immunity to any “potential co-conspirators” and prevented victims from even reading about the court’s settlement.

And like anything in 2019, President Donald Trump factors into the story. But depending on where you stand on him, you either believe he’s complicit in Epstein’s crimes—and guilty of heinous acts of his own—or he’s the one who finally brought a notorious pedophile to justice.

Epstein and Trump have circled around each other for decades in the way rich people in high society seem to do. Trump has been photographed with Epstein, and publicly acknowledged that he knew him.

And in the run-up to the 2016 election, although it flew somewhat under the radar at the time, one woman said Trump assaulted her several times and raped her once at Epstein’s home in New York when she was a teen.

Now that billionaire child sex trafficker Jeffrey Epstein is back in the news, it seems like a good time to take a closer look at allegations that Donald Trump raped a 13-year-old girl at Epstein's Manhattan home in 1994.

Trump is more than overdue for his #MeToo reckoning… pic.twitter.com/pumMTXcA3h

The suit came in September 2016, right before Trump’s “grab them by the pussy” comments were released and a flood of women said the then-candidate assaulted them. It got lost in the news and faded from focus.

“Jane Doe” alleges Donald Trump sexually assaulted her on four separate occasions, culminating in a rape when she was just 13 at Jeffrey Epstein’s mansion.

Her evidence? Three sworn declarations – from her, a friend she confided in at the time, AND one of Epstein’s recruiters. pic.twitter.com/NtIlfxL0c1

The way the woman says she was recruited to work for Epstein matched reports of similar women, who said they were groomed to provide sex for powerful visitors to Epstein’s homes and private island.

Jane came to New York in June 1994 “in the hope of starting a modeling career.” She soon met "Tiffany," who offered to bring her to parties where she could meet folks in the business – hosted by Epstein.

This is eerily similar to tales of recruiters in @MiamiHerald's reporting. pic.twitter.com/pPuXs8mDgX

In the affidavit she filed, as part of a civil suit against Trump, she had multiple witnesses corroborate her story.

Jane also filed a sworn declaration from Tiffany, who says Epstein employed her starting in 1991 “to get attractive adolescent women to attend these parties.”

Tiffany corroborates Jane’s story and claims to have “personally witnessed” the four encounters between Jane and Trump. pic.twitter.com/YUClxQcgX4

Trump has made light of Epstein’s illicit behavior, noting once that Epstein liked beautiful women who are extremely “young” and called him “terrific.”

Trump admits to a close friendship with Epstein. He told New York magazine in 2002:

“I’ve known Jeff for fifteen years. Terrific guy…it is even said that he likes beautiful women as much as I do, and many of them are on the younger side.” https://t.co/rmIcMBA3nS pic.twitter.com/HkMElrujgq

“I’ve known Jeff for 15 years,” Trump once said. “Terrific guy … It is even said that he likes beautiful women as much as I do, and many of them are on the younger side.”

There’s also the matter of Alexander Acosta, Trump’s labor secretary. Acosta was the prosecutor in Florida who gifted Epstein a sweetheart deal, which allowed him work-release, meaning he was outside of jail 12 hours a day during his year-long sentence for soliciting underage sex.

In an expose by the Miami Herald, it was revealed Acosta actually worked with Epstein’s lawyers to craft a favorable non-prosecution agreement—essentially giving in to all of Epstein’s demands—and to keep records of the case completely sealed, even to Epstein’s own victims.

Given Epstein’s illegal behavior was an open secret, which Trump may have participated in, you seem to have Trump expressly praising a pedophile, and then promoting the government official who helped prevent Epstein from receiving real justice for his crimes.

Unless he was trying to signal all along that Epstein needed to be arrested, which is what many on the right believe.

Because in America’s online miasma, there is the working theory that Trump is a force for good who is waging a war against a pedophile ring. It’s the Pizzagate conspiracy, which metastasized into QAnon. Pizzagate came about when conspiracy theorists, trying to decode Hillary Clinton’s stolen emails, became convinced her campaign was running a child sex ring.

While that’s absurd on its face, Clinton’s husband, Bill Clinton, has had a documented history of traveling with Epstein on his private jet, which Epstein allegedly staffed with underage teenage girls.

And because, in this theory, Trump is working to out the pedophiles in the Democratic party, the arrest of Epstein is being seen as proof positive their belief was right.

Meanwhile, on Reddit’s pro-Trump hub r/The_Donald, a lengthy thread has developed defending Trump over any evidence that ties Trump to Epstein. Among the highlights are that Trump tried to help the lawyers of Epstein’s victims.

The idea that Trump has been working long-cover to get elected so he could take down Epstein became a meme.

But if Trump wanted to revel in his long-planned operation to take down one of America’s most notorious pedophiles, he sure is being conspicuously silent on it.

On Monday for example, instead of tweeting about Epstein, he’s been posting about the crowd size at his Fourth of July event.