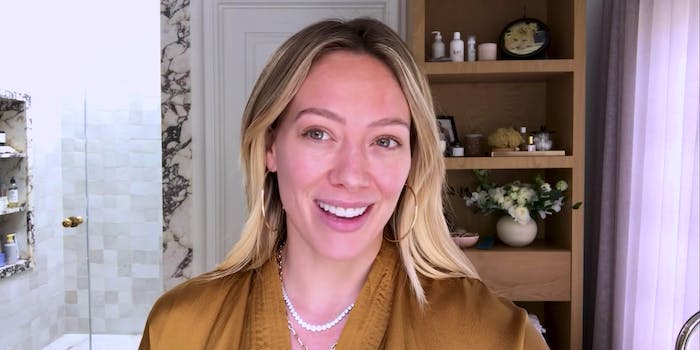 QAnon believers are pointing to an old photo of her son as proof.

Hilary Duff became a trend online Saturday after conspiracy theorists claimed that the celebrity was guilty of child trafficking.

The rumor began with a now-deleted Twitter thread in which the former Disney star was accused of trying to sell her 8-year-old son Luca.

The conspiracy centers around a screenshot of a years-old Instagram Story from Duff’s account in which numerous photos of her son can be seen. One of the photos, the thread claims, shows the boy “completely nude” with “white markings all over his body.”

The photo, according to the conspiracy theorists, is evidence that Duff is sending “a message to the devils of the elites that her son is for sale.”

“There is no other explanation,” the thread’s author said.

The rumor was immediately picked up by QAnon conspiracy theorists, who regularly accuse prominent individuals of human trafficking and pedophilia.

Not only did the topic begin trending on Twitter, but the top result on YouTube after searching for “Hilary Duff” also became a video on the conspiracy from a QAnon account.

In her first tweet in over a month, Duff appeared to respond to the internet rumor by calling her accusers “disgusting.”

“Whoever dreamed this one up and put this garbage into the universe should take a break from their damn phone,” Duff said. “Maybe get a hobby.”

Duff is the latest in a long string of celebrities to become targets of far-right conspiracy theorists.

Hollywood actor Tom Hanks was recently accused of pedophilia, while businesswoman Oprah was likewise alleged to be involved in child trafficking. The QAnon followers even went as far as to claim that Oprah had been arrested as part of an operation spearheaded by President Donald Trump to dismantle a worldwide satanic pedophile ring.

“Just got a phone call that my name is trending. And being trolled for some awful FAKE thing,” She said. “It’s NOT TRUE. Haven’t been raided, or arrested. Just sanitizing and self distancing with the rest of the world. Stay safe everybody.”