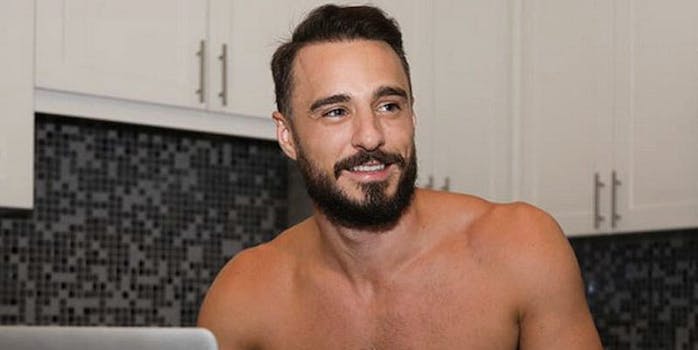 ‘Plane Bae’ has revealed himself to the world

His mystery lady seems to have hit the jackpot.

Earlier this week, the internet was captivated when an actress named Rosey Blair documented an in-flight romance for the ages. Blair had asked an attractive young woman to swap seats with her so she could sit next to her boyfriend one row back, and then joked that the fair lady would perhaps find true love with whoever her new seatmate turned out to be.

Moments later an equally attractive young man made his way back and the two immediately connected over a mutual love of fitness. They even shared a cheese plate and made a suspiciously timed trip to the plane’s lavatory.

He also responded to one curious fan who wanted to know what went down in the bathroom:

And even got a hashtag of his own trending:

Since his big public debut, Holden definitely seems to be enjoying the attention, whereas his Cinderella—known only by her first name, Helen—is largely avoiding the public at the moment. But for now, Euan is soaking up the spotlight on Twitter and Instagram, as well as an appearance on the Today show Thursday morning along with Blair and her boyfriend.

Just sitting around thinking … shirtless, as one does!

The internet this week fell in love with a viral story about a woman who asked to switch seats on her flight and managed to spawn a fairytale for two other passengers. pic.twitter.com/PDMUOpKawn

Not surprisingly, the love story attracted the attention of some pretty high profile fans:

Travel expectations have now gone from finding overhead bin space, to finding a #PlaneBae. This might be the best outcome to a seat-switch in plane history. https://t.co/xR9fJmVfck

But the million-dollar question on everybody’s mind—are Helen and Euan a couple now?—is still unanswered. Despite her hesitancy to be in the spotlight, Holden said in a video message to his fans on Thursday that Helen is being “super supportive” over the fanfare their connection has gotten. Likewise, Blair tweeted that Helen feels “positively” about the direction things are headed in.

All jokes aside, it really is only a matter of time before a Hollywood studio snatches the rights to Helen and Euan’s story. And from the looks of it, Euan seems like he would be perfectly happy playing himself in the film adaptation of his life.

Best of luck to the couple!