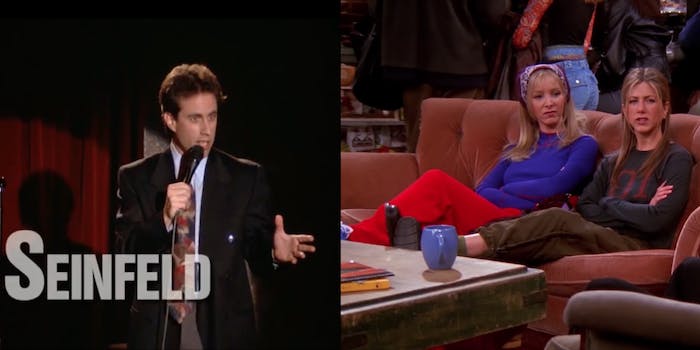 ‘Seinfeld’ and ‘Friends’ fans feud over which sitcom is better

'Seinfeld' fans did not come to play.

It’s the Twitter showdown the internet has been waiting for.

“Beware. Anyone who tries to tell you Friends is better than Seinfeld is trolling you,” Kate Hyde tweeted.

Beware. Anyone who tries to tell you Friends is better than Seinfeld is trolling you.

When people try and convince me that #Friends is better than #Seinfeld pic.twitter.com/wKFBICkHps

The people saying Friends is better than Seinfeld probably dance like this. pic.twitter.com/gZqXXEuDzo

Seinfeld over Friends. It isn't a conversation.

But that doesn’t mean the Friends fandom didn’t make good points as to why it was the better sitcom.

“Seinfeld had nowhere near the comic timing and originality that Friends had…and to add to that the depth of each character and their uniqueness left Seinfeld in the dust ……to sum up Seinfeld just simply wasn’t funny friends was hilarious,” Twitter user @emacm2000 noted.

Simple equation for y'all. Friends>Seinfeld. Do the math.

No contest Friends all the way #friends #seinfeld pic.twitter.com/EYLdb3Tde0

The debate appeared to have started after an Australian new site asked its Twitter followers to “settle” the question on which show was better.

“OK, let’s settle this… Friends Vs Seinfeld: Which show is better?” it questioned.

OK, let's settle this… 'Friends' Vs 'Seinfeld': Which show is better? pic.twitter.com/a7hLQfwgpY

From there, people all over the globe began to respond, and the debate soon took on a life of its own. After trending across the U.S., the Hollywood Reporter shared an old video from May, featuring celebrities attempting to answer the exact same question.

Even they were stumped.

“It can’t be both?” asked actor Mamoudou Athie from the film Sorry for Your Loss.

But on Twitter, despite Friends fans’ best efforts, the Seinfeld fandom made it crystal clear that the two sitcoms shouldn’t even be compared.

“Seinfeld and it’s not even close. The fact that Friends is even discussed in the same league as Seinfeld is baffling to me,” Twitter user @caseyxnl wrote.

Putting aside the debate, this is a big year for both television shows. 2019 marks the 30th anniversary of Seinfeld and the 25th anniversary of Friends. Plus, even those on Twitter agreed, that despite all the prestige and influence these two shows hold, only one show really stands above them all.

“The appropriate answer to Friends or Seinfeld? is Frasier.”

The appropriate answer to "Friends or Seinfeld?" is "Frasier".