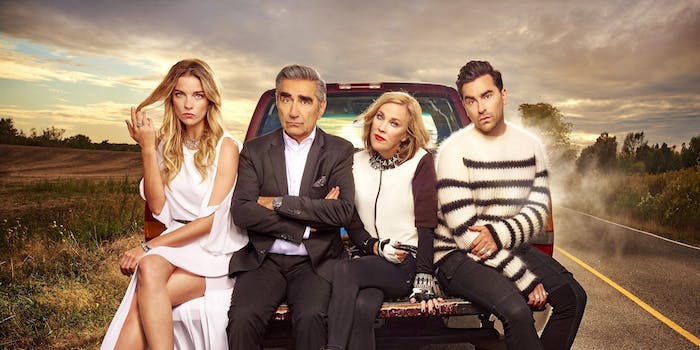 ‘Schitt’s Creek’ sweeps the 2020 Emmys, partly thanks to Netflix

It was a well-deserved win after being shut out of the Emmys for five years.

Canadian sitcom Schitt’s Creek cleaned up at the 2020 Emmy Awards, setting a record by winning nine Emmys for one season of a comedy series. It’s a happy ending for the show, which had a cult following on CBC, but didn’t attract mainstream praise (or awards) until wider audiences began to discover it on Netflix. The show hadn’t won a single Emmy for any of its first five seasons, but it was a popular streaming choice this year, offering an upbeat and heartwarming distraction during lockdown.

Actress Catherine O’Hara was a particularly exciting win because despite her long and celebrated career spanning improv comedy, sitcoms, and films like Beetlejuice, she’d only won one primetime Emmy before now, back in 1982. Her flamboyant yet detailed performance is often singled out as a highlight of Schitt’s Creek, portraying the eccentric mother Moira Rose.

Elsewhere at the 2020 Emmys, Succession landed four big wins in the drama category (including Jeremy Strong for best acting), and Euphoria star Zendaya made history as the youngest person (at 24) to win best actress. Watchmen‘s Regina King and Yahya Abdul-Mateen II won Emmys for best actress and supporting actor in a limited series, continuing an incredible run for King. In the past five years she’s won four Emmys and an Oscar, in a wide variety of different roles. Watchmen landed 11 wins in total (including technical categories), the biggest being best limited series.

This year’s Emmy ceremony was a unique event, for obvious reasons. Hosted by Jimmy Kimmel, the live ceremony took place under quarantine conditions, with winners giving their acceptance speeches by video call. The most memorable element was the choice to have Emmy statuettes delivered in person by people in tuxedo-style hazmat suits.

Thanks to this hilariously weird video from Ramy Youssef (nominated for lead actor in a comedy series for Ramy), we know that the Emmy delivery people seemingly waited outside nominees’ houses in case they won, and then left once the real winner was announced, taking their prop trophy with them. Wild.