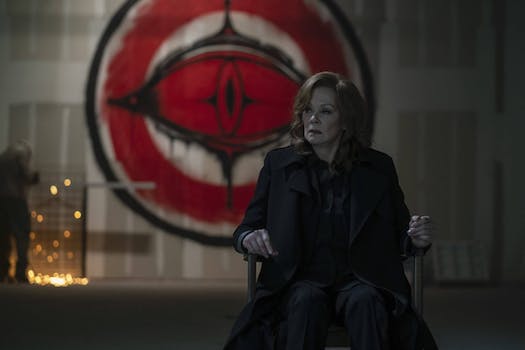 We have mixed feelings about this one.

The most surprising thing about the Watchmen finale was how conventional it was. A couple of supervillains gave evil monologues and then got killed off. Dr. Manhattan and Adrian Veidt, the not-so-heroic legacy characters from the original comic, turned out to be instrumental in saving the day. The world is saved once again, with surprisingly minimal addition to the political commentary in earlier episodes. Honestly, I was left with the distinct impression that Watchmen peaked with its brilliant fifth and sixth episodes, which isn’t how I expected to feel at the show’s supposedly-epic conclusion.

We open with a flashback to the 1980s, where Adrian Veidt records his message to future president Redford, employees working silently in the background. One of them, a cleaner, breaks into his office and steals what we soon realize is a semen sample, ostentatiously hidden behind a gaudy portrait of Ozymandias. She inseminates herself, and nine months later Lady Trieu will be born. I already have mixed feelings about this because it comes across as a reverse Rey-from-Star-Wars, needlessly connecting Lady Trieu to her narrative predecessor. The scene itself is very fun, and I enjoyed the hell out of the follow-up where a young Trieu tracks Veidt down in his secret lair. Similarly, you can’t help but laugh at the revelation that Trieu’s “statue” of Veidt is actually him frozen in faux-carbonite after being retrieved from Europa, meaning all the Veidt scenes were actually flashbacks too. (“I did it 35 minutes ago” is the family motto, of course.) But the concept of making Trieu his biological daughter is… hmm.

Both characters believe that Trieu inherited her genius from her father’s DNA, an idea that the show tacitly endorses. Out of everyone in the world, she’s the only person who successfully follows in Veidt’s footsteps, achieving great things after starting out with “nothing.” She’s his direct successor, and she wants to prove herself in his eyes, which is why she rescues him from Europa to watch her steal Dr. Manhattan’s powers and become a god. But at the end of the day, we’re left with some troubling optics for her character arc. The show introduces her, a Vietnamese-American woman, as Veidt’s spiritual successor, overtaking his achievements and plotting a world-changing scheme. So far so good. But the finale implies that she has Veidt to thank for her genetic advantage (!??), and culminates in Veidt killing her with a rain of squid in order to save the world. It’s not as if Veidt is actually portrayed as heroic—he’s as buffoonish as ever, and the takedown was orchestrated by Dr. Manhattan—but we literally get a scene where Veidt smugly explains that Lady Trieu is too narcissistic to use her superpowers for good (“It takes one to know one”) before killing her off. Ozymandias lives on for a potential season 2, arrested by Laurie Blake in another surprisingly conventional conclusion.

Angela Abar is more of a spectator this week, dovetailing with the original Watchmen comic’s view of vigilantes being relatively useless. Her concerns are personal rather than political: She wants to save her husband, so she tracks him down to where the Seventh Kavalry have locked Dr. Manhattan/Cal Abar in a containment unit, preparing for Senator Keene to steal his powers. Posing in an admittedly hilarious pair of Dr. Manhattan underwear, Keene delivers a standard supervillain speech to his audience of racist conspirators, who are summarily disintegrated by Lady Trieu. She orchestrated the whole scenario, killing the Cyclops society as a favor to Will Reeves, and then taking control of Dr. Manhattan. Locked inside a faulty power-transfer device, Keene turns into soup. Convinced she can use Dr. Manhattan’s powers more effectively, Lady Trieu seems like she’ll succeed where Keene failed… until Veidt obliterates her with a deluge of frozen seafood. So Angela’s rather downbeat role is to watch her husband die and then return home to tuck her kids into bed.

While Lady Trieu and the Seventh Kavalry got conventional endings as comic book villains, Angela Abar did not get a traditional protagonist finale. For the most part, she was powerless in the struggle between Trieu, Keene, and Veidt, and she doesn’t actually succeed in saving her husband. In a callback to their first meeting in Vietnam, the final scene sees her find an egg that may or may not contain Dr. Manhattan’s powers; a gift from her husband. She eats it and steps out onto the pool in her garden, leaving us to guess whether she’s able to walk on water. In the long run, every character who viewed themself as “important” saw their ambitious plans culminate in disaster and failure. Meanwhile, Angela Abar may wind up with superpowers for the everyday human reason that her husband loved her.

Will Reeves is the only person who arguably “won” anything, and his quiet scene with Angela in the theater was easily my favorite part of the episode. Amid the lightning storm of apocalyptic conspiracies and flashy megalomaniacs, this is the story that actually matters. An old man returning to the place where he heard his mother play piano as a child, reflecting on a lifetime of struggle following the defeat of his age-old enemies. Hooded Justice is perhaps the only true superhero in Watchmen canon, operating as a lone activist who dedicated his life to destroying a specific enemy: the Cyclops gang, who he finally wipes out after 80 years. And rather than taking a victory lap at the end, his grand finale involves a quietly moving reunion with his granddaughter, where he admits that his whole life has been shaped by anger and fear.

There’s so much going on in Watchmen that I may well have a different opinion in a couple of weeks—which is definitely what happened with the first couple of episodes. But for now, I’m a little underwhelmed. For a show that dug so deep into its political themes early on, the finale was more about tying plot strands together for a clash-of-the-titans showdown. Like the comic, we’re meant to view these nine episodes as a unit, but after front-loading the season with complicated worldbuilding and hard-hitting political drama, the finale was less cohesive than I hoped.